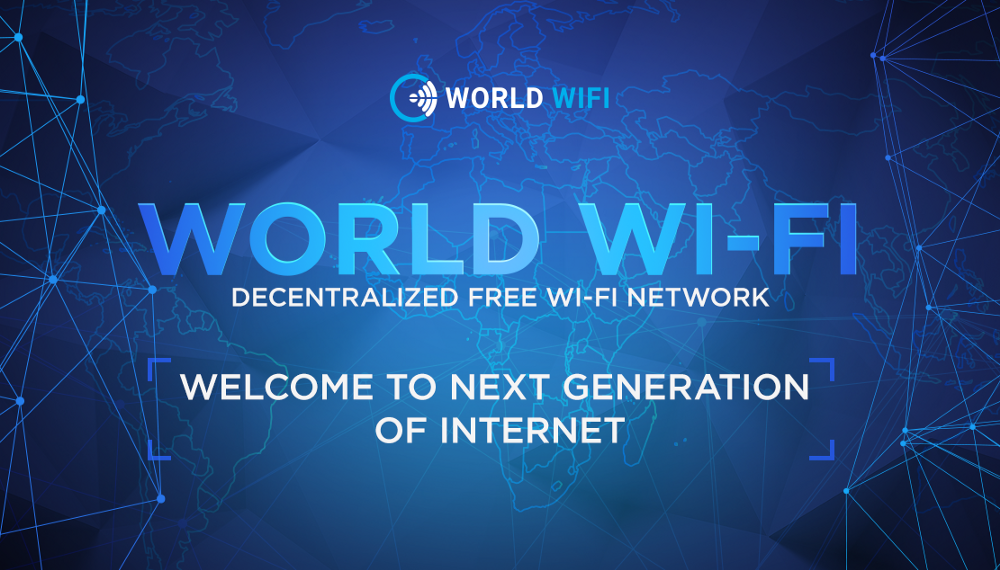 The network will be based on privately owned routers (most of which are residential). Their owners may offer free Internet access and earn cryptocurrency through Internet advertising.
How it works?
World Wi-Fi is a global, decentralized and free platform that allows router owners to share the internet with other users. Users use the web for free, without having to disclose personal information such as phone numbers and e-mail. The solution is win-win situation for both parties. The user is given access to the internet for free and the landlord serves as advertisers reaching their target audience. This system is run using WeToken (WT) based on Ethereum blockchain. All data related to tokens, transactions and advertisements will be retained and stored on the block chain to ensure transparency and dependence between networks and the participating parties. The network also allows you to use two types of transactions: cost-per-thousand-click (CPM) and cost-per-click (CPC).

So, everybody wins: the guest user no longer pays for access to the internet, the router owners generate revenue by sharing their resource, and advertisers reach their target audience.

According to the World Wi Fi program, the ICO will last until April 2018. Soon, the product will be launched, while WeToken (WT) will be available on several international exchange services. During the summer of 2018, software development will be complete for larger chains that issue private routers. The last stop is a worldwide marketing campaign aimed at advertisers. The company behind World Wi-Fi is already focusing on public Wi-Fi and Advertising, led by Ilya Yashin and Yan Sepiashvili. To date, Adrenta has more than 14,000 open networks and over 100 partners worldwide. The company operates in more than 80 cities and has more than 200 employees. Their increase in wi-fi points in 2017 was up to 784%. The project’s advisors are Dmitry Dain (member of the World’s Cryptographers Association, developer of Wi-Fi and LTE technology, founder of Virgil Security) and Fred Ledbetter (CEO of Imaginet / Czech Telecom, CCO at Virgin Connect, CMO at Golden Telecom).

With a limited spread of tokens, they may increase in value if the interest in the product becomes large. Minimum capital travel is 3.5 million USD, a hard cap of 25 million dollars. If the company does not receive minimum capital support, investors will return their investment. Every person over 18 years old have the opportunity to attend. Unsold tokens will be burned on the same day as the ICO is over.
Investing in ICO, make sure you use a wallet that supports ERC-20 tokens.