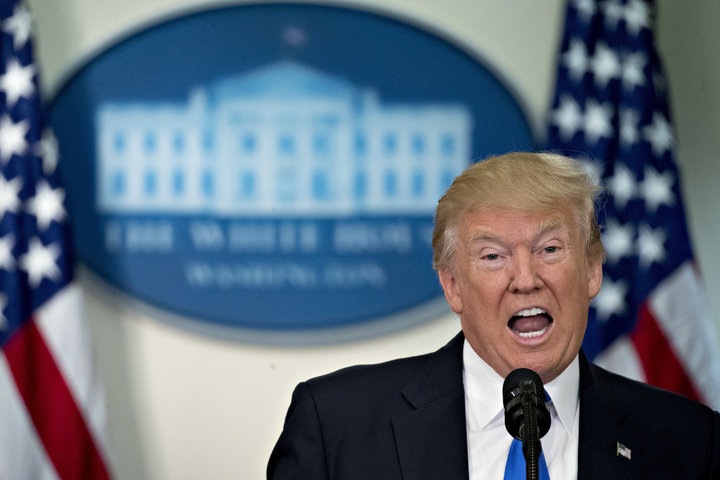 There’s no denying that President Donald Trump loves to hate The New York Times. But his latest sit-down with its reporters ― his second in just over a month ― is a reminder of his entwined relationship with the newspaper to which he keeps giving interviews.

Since winning the presidency, Trump has fired off more than two dozen tweets attacking the legacy media outlet, almost exclusively referring to it as “the failing” New York Times ― even when he’s agreeing with its coverage. Since announcing his candidacy over two years ago, he’s consistently singled out the Times in his tirades against the media and accused the “Fake News Joke” of doing a hatchet job on him
Perhaps most alarmingly, his gripes with paper often come with implications that he’d like to crack down on press freedom.

So why, then, does Trump continue to give the Times so much access, perhaps only rivaling that which he gives Fox News? After reading Wednesday’s excerpts from the Times’ interview ― an at-times rambling conversation in which he insisted French President Emmanuel Macron “loves to hold [his] hand” and contemplated the role cold weather played in world history ― Trump’s decision to once again sit down with the “dishonest” and “irresponsible” paper underscores that question.

His draw to the Times may stem from the way its reporters communicate with him ― a skill that has not gone unnoticed. Maggie Haberman, one of the Times staffers who interviewed Trump in the most recent sit-down and, like the president, a native New Yorker, is “a master of the dark art of Trump charming,” Slate reporter Katy Waldman observed in April.

“Trump is mostly an empty basket, but at the bottom of that basket lies a serpent, and Haberman knows how to conjure it forth: with flattery, simple questions, and boundless patience,” Waldman said.

Those tactics are apparent in Wednesday’s excerpts. When Haberman agrees with Trump that Americans don’t want to lose health care coverage for pre-existing conditions, for example, the president is forthcoming with an explanation.

HABERMAN: That’s been the thing for four years. When you win an entitlement, you can’t take it back.

TRUMP: But what it does, Maggie, it means it gets tougher and tougher. As they get something, it gets tougher. Because politically, you can’t give it away. So pre-existing conditions are a tough deal. Because you are basically saying from the moment the insurance, you’re 21 years old, you start working and you’re paying $12 a year for insurance, and by the time you’re 70, you get a nice plan. Here’s something where you walk up and say, “I want my insurance.” It’s a very tough deal, but it is something that we’re doing a good job of.
Ultimately, others theorize, Trump is on a mission seeking approval, even from those he disparages. Despite what Trump says to discredit the Times, CNN political analyst David Gregory said on air Thursday, he has an irresistible desire for positive coverage from it.

“It’s striking that the president who spends so much time trying to discredit the news media to convince his supporters simply not to believe outlets like The New York Times, in the end cannot quit Maggie Haberman and that’s just the bottom line,” he said. “Because he wants legitimacy and he knows you have to go to Maggie and her colleagues who are really the journalists of record on this Trump presidency.”

His fixation on the Times is longstanding, Timothy O’Brien, a former Times reporter and author of the Trump biography TrumpNation told HuffPost last summer.

“I think he’s always had a deep fascination with The New York Times and a need to get the paper’s broader approval of his career and who he is,” he said, suggesting Trump craves his hometown paper’s attention.

At the end of this latest sit-down, Trump implored his interviewers to do him justice in the story.

“I’m doing a good job. Just treat me fairly. Because I can take everything I said and put a stupid spin on it, or I can put a fair spin on it,” he said.