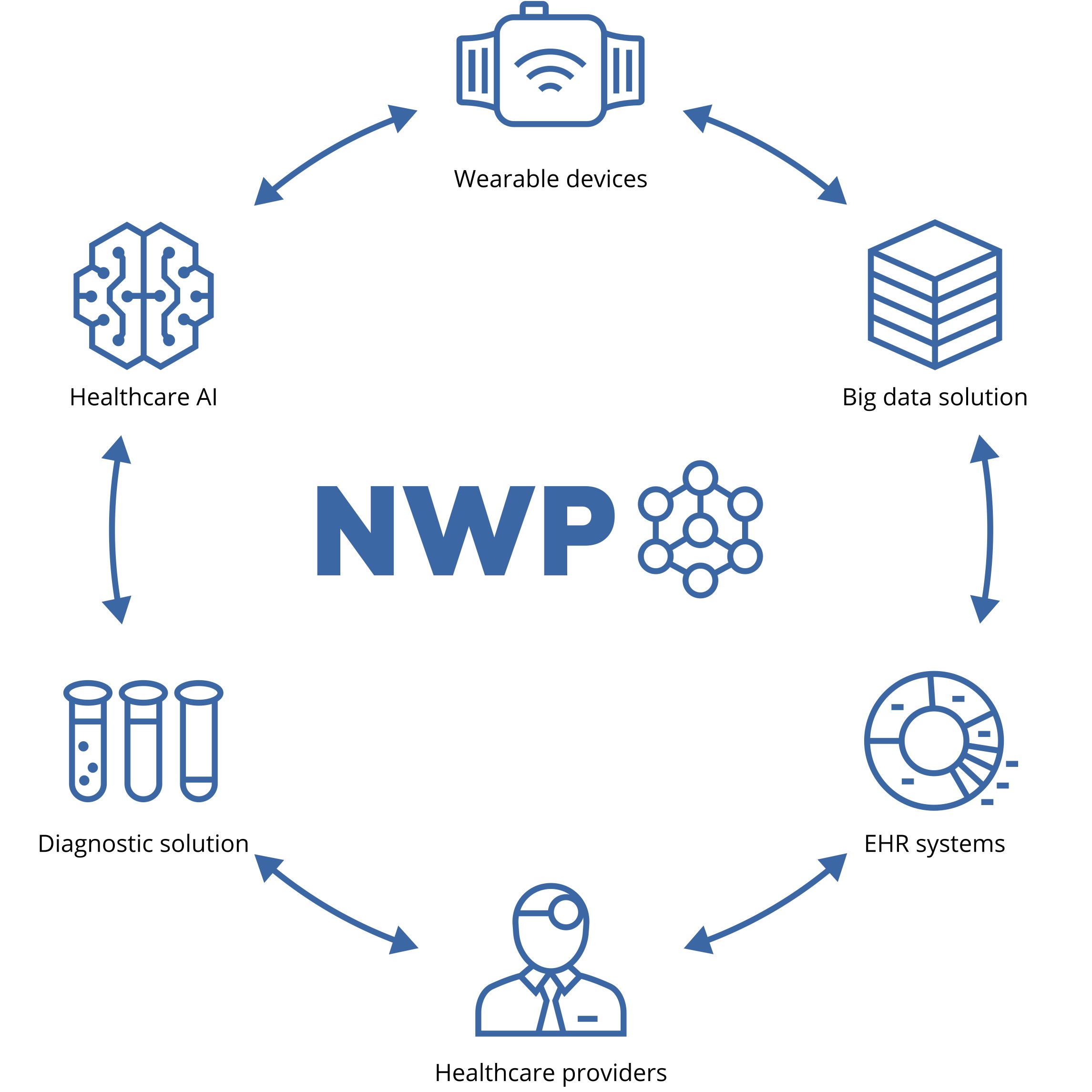 The NWP solution is a platform that integrates smart devices and databases into a single network that provides access to existing healthcare and quality of life services. The platform is built on advanced technologies in the field of artificial intelligence , data security and blockchain.

As part of the project, NWP Solution launches the smart bracelet — NiteWell for the monitoring of the health of newborns from 0 to 12 months. The bracelet collects data on the state of the heart rhythm, patterns of motion, body temperature and the environment that will form the basis for an active child care system in the first year of his life.

The platform provides an opportunity for its participants to solve their important tasks — ensuring their health and the health of their loved ones on the one hand and optimizing the costs of clinical health care, insurance, or purchase of drugs with another. Users are given a unique opportunity to participate in research and development, providing data for the analytical tasks of participating companies, as well as blockchain technologies that ensure integrity, safety, and, most importantly, transparency in the use of the accumulated knowledge base.

To satisfy legal requirements NWP tokens are not securities, dividends will not be paid to their holders. In this regard the part of commissions received by the platform will be used for guaranteed purchase of NWP tokens on exchanges with subsequent destruction. Regular decrease of token quantity in the market will stimulate the increase in the rate of NWP token on exchange.
NWP token will be used for service payments. Along with the regular increase of operations quantity in the system, the demand will be increasing as well as NWP rate.

Independent international auditors and consultants will be engaged in the storage control and expenditure of money collected during ICO.

NWP solution is an Estonian-based company. The NWP team has been working in healthtech for already more than 7 years, successfully created LABORATORY INFORMATION SYSTEM OF THE 5TH GENERATION.

The official start of upcoming NWP pre - ICO is on April 30, 2018. Pre-ICO participants will be offered the company’s own NWP tokens based on the Ethereum platform. The starting price has been set at 0.01 USD per token.

The pre ICO will last until June 1, 2018. During this period, NWP’s founders expect to collect around 700 000 USD. The resources gathered through the pre ICO will be used for the release alpha version of platform on Android and iOs in Q2-Q3 2018. ICO will take place in December 2018.

“Traveling almost all the time, I was faced with the problem of lack of access to my medical records in external situations. Then in 2016 I decided to create a platform that would allow me as a user to have access to this data and provide it to others if necessary. Based on the entered data and AI, the user will get scoring of a personal health state and receive a recommendation to improve it. Within the framework of the project, tokens will be used as a payment within the ecosystem and rewarding the users for the continuous use of our service. This will allow users to optimize the cost of medical care and the cost of insurance.”