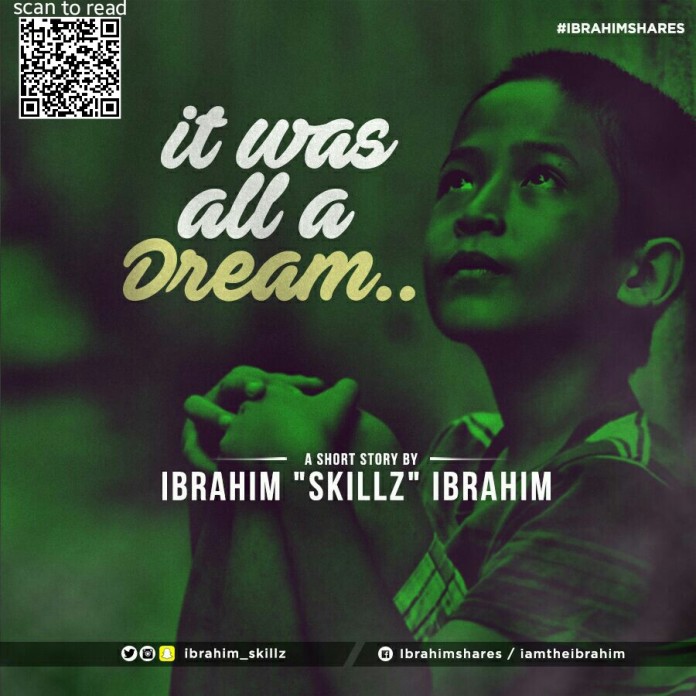 Note - That the story you are about to read doesn't belong to me but was written by Ibrahim Skillz Ibrahim. #IBRAHIMshares, that's why i won't be copy/ pasting the full text[story] - I am only sharing it for people to get aware of such great story and for readers pleasure and in the sense i feel this is my story in a way, if you enjoyed it and care to read it all - click the website below for more

Why I'm i sharing this story?
Well the first day i read the story, it felt like he was actually talking to me, being a person i know, to me it feels like he was addressing the story to Me, and yes the story was not base on my musical career or relating to Me in person, its just what i feel, every details there feels like i was once on the shoes of the main character and i have once been there.

I know you all will be asking how he came out with that story, well Ibrahim skillz works with a music company and we've had a lot of conversations when i was much active on the Nigerian music scene, trying to get heard, no surprisingly when i read this story and it feels i was the main character been portray.

And to Make it all funny and more exciting,
When i sent my first letter to him, the story i was actually emphasising on,was almost based on what he said (don't get me wrong might be coincidence don't you think)

"Dear boss, do you still remember about JAY JAY? Your short story it was all a dream and JON Dazzy? when JAY JAY became afraid cause he's gone perform on stage

With that said!!!!!!
This is the link to the LAST LETTER TO MR SKILLZ.

NOW TO THE STORY

His heart keeps racing, he is trying so hard to stay calm but that was proving to be no easy task.

It’s a massive room, exotic and tastefully furnished. No tables, just sofas and stools. There are paintings on the wall, of musical legends from different genre, race and sex. The biggest of them all, Fela, doing his signature two-fists-up pose. Typical event greenroom setting.

He looks around him.

All these celebrities in one place and he is in here with them.

He feels a sense of profound happiness, but he feels a greater sense of anxiety which is overshadowing everything else and affecting his countenance and composure.

He has his phone in his right hand, he makes to press a key on it, he realizes it’s covered in sweat.

Damn! He would have to calm his nerves somehow, and soonest in his own interest.

Seated at the far end of the room, his seat faced the exit. He has his manager to his left and his two dancers to the right. A large stool lay in front of them. On it is a bottle of table water, a few cups and a bottle of champagne, but none of them is drinking. This was by far, the farthest any of them had come in their individual careers, with all their role models in the same room as them. It is obvious to everyone, they felt inferior and out of place.

It’s the greenroom of the biggest carnival in the country. An event, even the biggest of artistes feel privileged to be a part of. There are several corners to the room, with different artistes and their individual team awaiting their turn to perform. Every now and then, the stage manager would pop in to give instructions and updates to everyone on who was next to grace the stage.

He tries to playback his song in his head, it just isn’t coming to him, at all. Of all the times for something like this to happen, it’s almost as if the song had been erased from his memory.

What if he doesn’t remember the song on stage? What if he gets on stage and loses his voice? Or he trips and falls? Or worse, the crowd boos him? He has never been here before, he has no idea on how to go about things here and sadly, he had more experience in this regard than his manager, who should have helped.

“I wan go pee” he whispers to his manager.

“E go better make I follow you” his manager whispers back, visibly nervous.

They are almost at the entrance, marked ‘convenience’ when a tiny voice pierces through the noisy atmosphere of the room.

They both stop in their track, stopping to look back. Colliding into each other has them scrambling for balance. It takes several long seconds for both of them to find their bearings, they scream in unison,

“You are up next! Get your dancers ready, you go up in ten minutes. Here’s you mic” she says, handing him a medium sized cordless microphone. His grip is shaky, and it falls off his hands, making a rather loud disturbing sound that echoes through all the speakers in the venue as it hits the ground. The noise sweeps across the whole room, grunts of disapproval following suit.

“Hey! Are you trying to mess up my show?” The stage manager quips in frustration masked in anger.

“I am sorry. Please I am so sorry” he says, bending down to pick the mic up.

There is a long pause, all eyes on him now.

“Did that dude just say, ‘I am sorry’ into the microphone cos I am sure I heard that from the speakers” Nodemine a prominent rapper in the room asks loudly.

“I swear I didn’t know… I didn’t do that on purpose” he finishes even louder into the microphone, his manager tries to take the mic from him, he wouldn’t let it go. They both struggle for it, loud disturbing noise from their struggle echoes through the venue.

“Quiet!” A familiar commanding voice breaks it all up. All eyes turn in the direction which the voice came. It’s Jon Dazzy, arguably the biggest producer on the continent, and a record label CEO.

He heaves himself off his seat, picking up his glass of champagne, walking to Jay Jay and his manager. The horrified stage manager comes to stand beside him, arms at akimbo.

“Hi, I’m Jon Dazzy” he says, reaching out for the microphone.

“I’m Jay Jay sir, it’s nice to meet you. I’m sorry about all these, I’m just so tensed up being in the same room with all of you guys. I look up to you and I am about to face an actual crowd for the first time. Please forgive me”

Laughter breaks out from across the room, several people making fun of the situation.

“Don’t be like that Jay Jay, all of us here have experienced this same feeling at one time or the other, don’t mind all these people, they have all been here too. It’s ok to be nervous, just don’t let it rob you of your opportunity to shine” Jon dazzy encourages, putting his arm around Jay Jay shoulders, his drink on hand almost spilling on him. He slides over the switch of the microphone to turn it off with his other hand. “Introduce me to your team”

Jay Jay introduces his manager who is still glued to his side, he beckons on his dancers to come forward. The girls by now, look like frightened kittens in their seats.

“We need to get backstage right about now” the stage manager cuts in.

“Ok, go ahead, take a deep breath and own the stage” Jon Dazzy encourages again, patting him on his back, whilst handing him back the microphone.

If you enjoyed reading it and wish to Continue reading, click here 😉

This evening with my friendname kush- Video of us kushing some Loud.