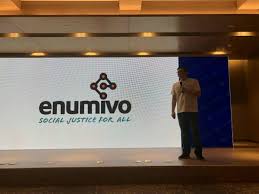 "Popular China based cryptocurrency exchange, Coin Tiger have announced that they have officially listed the main net Enumivo cryptocurrency on their platform'',
With two pairs (bitcoin and Ethereum).

This came into being after Enumivo closed down with the third position on the first very cointiger free listing on their platform.
The Enumivo community are enthusiastic and bullish with cooperating with one another,its been a very good team play and appreciating that efforts all Enumivo voters on Cointigerpro would receive an airdrop that would be Distributed to them on September 21st.

The Enumivo project has come a long way, though still young.
I Vividly remembered the project way back February until now, with the sole aim of delivering a universal basic income to Enumians, before this development and initiatives could commerce into designing something unique like a #UBI on a blockchain, a scalable, fast, low fee TX and also the usability is a characteristics to run smoothly and with no much cons- for a perfect network conditions and the EOS project suits every feature mentioned above and suitable to implement such - with still much more things to add up in order to achieve such,like ideas/sacrifice/dedications and a whole lot to Make the UBI a success. Enumivo which forked/clone the EOSIO software by Block.One is operating a fully functional blockchain since June 3rd 2018.
The Enumivo project started off with the Erc20 tokens on the Ethereum network and the first ever self claimed airdrop on the eth smart contract that allows anyone to get this tokens once they send a 0 amount of Ethereum to the contract address.The mainnet launched and are seeing all Erc20 tokens swapped to Enu mainnet tokens.
The Enumivo token swap is still ongoing into the Enumivo mainnet tokens and would be officially over on July, all tokens not swapped to mainnet becomes useless.

Why many Enumians are happy

Before switching to mainnet, the ENU Erc20 tokens was only tradable on decentralized exchange, like Ether Delta and forkdelta, also tradable on IDEX before upgrading its Erc20 tokens into the ENU mainnet - The mainnet ENU token was only tradable on fellow China based cryptocurrency exchange Kkex - before being listed.Prior to the listing of the ENU mainnet on its platform - The ENU ticker and this listing on cointiger makes it alot easy to raise awareness for the Enumivo project.

The project was devised as a means of providing ‘social justice on the blockchain’ and delivering a UBI dApp which will be released in March 2019. One of the main purposes of the token is also to provide would be EOS developers with the opportunity to utilised the same functionality as the blockchain from Block.One but at a significantly lesser cost.

At present the Enumivo project is governed by the United Foundation of Enumivo and their development team are working on fine tuning their KYC system called the Enumivo Oracle. Their Oracle system will provide the basis of recipients who receive UBI payments from the Enumivo dApp, when it is released.

For more info about the Enumivo project kindly click here

See yah on my next blog, stick around ✌️