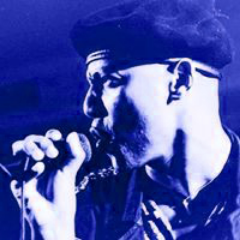 Swedish/Eritrean musician Kahsay was born in Asmara, Eritrea and moved to Sweden as a child. Kahsay’s music career started when he and his childhood friend J.K Roberts (Impera) started their first band The Invaders. The band where inspired by KISS, Queen and Iron Maiden. Later on Kahsay expanded his inspirational heroes to include artist like Prince, Bootzy Collins, James Brown, Earth, Wind & Fire, Kamelot, Marillion and Rick James.

The demo of 'Turn Me On' was written, recorded and mixed within five hours by Kahsay. When Kahsay’s studio partner pitched songs for his dance act - he included the demo of Turn Me On on his showcase. The first record company he went to signed Kahsay on the spot and when Kahsay realized that the record company wouldn’t let Kahsay produce the song himself, he boldly asked for Denniz Pop/Max Martin (by that time the hottest producers in Sweden) and they liked the song and wanted to do Kahsay’s first single.
It went Top 20 in Sweden.