Since the emergence of blockchain technology in 2008 when Satoshi Nakamoto introduced bitcoin,there have been rigorous efforts to apply the blockchain to several aspects of the global business process, Blockchain technology has been described as having the potential to disrupt many industries with low-cost transaction, immutability, and enhanced security. In the years that have followed, many other blockchain implementations have been developed with each one exhibiting unique features tailored to specific use-cases.

Blockchain has made it possible to issue just about any asset via a distributed ledger framework. With the aid of cryptocurrency tokens, these assets can be given economic value in order to initiate and validate several transactional processes. Several on-chain protocols have been developed by a number of startups and established companies alike in order to create blockchain-based solutions.

During the period the DApp lives in the Ethereum Network, we will be developing Filmgrid Blockchain, an Ethereum fork, on which the consensus algorithm Proof Of Work (PoW) will be changed to the consensus algorithm Proof of Elapsed Time (PoET), turning it into a Permissioned Blockchain. This way, this Blockchain’s need for miners is eliminated as the computing power is provided by the Filmgrid peers network.

Every device that runs Filmgrid’s DApp is a potential source of computing power. The PoET algorithm gives the opportunity to do processing in the backend of the device, randomly chosen, with a low power consumption while watching a movie. Users will have the option to enable or disable this function at will.

Filmgrid will provide server power for certain functions of the DApp and the off-chain interconnections, such as the video files retrieving or social network activity.

Filmgrid will provide server power for certain functions of the DApp and the off-chain interconnections, such as the video files retrieving or social network activity. 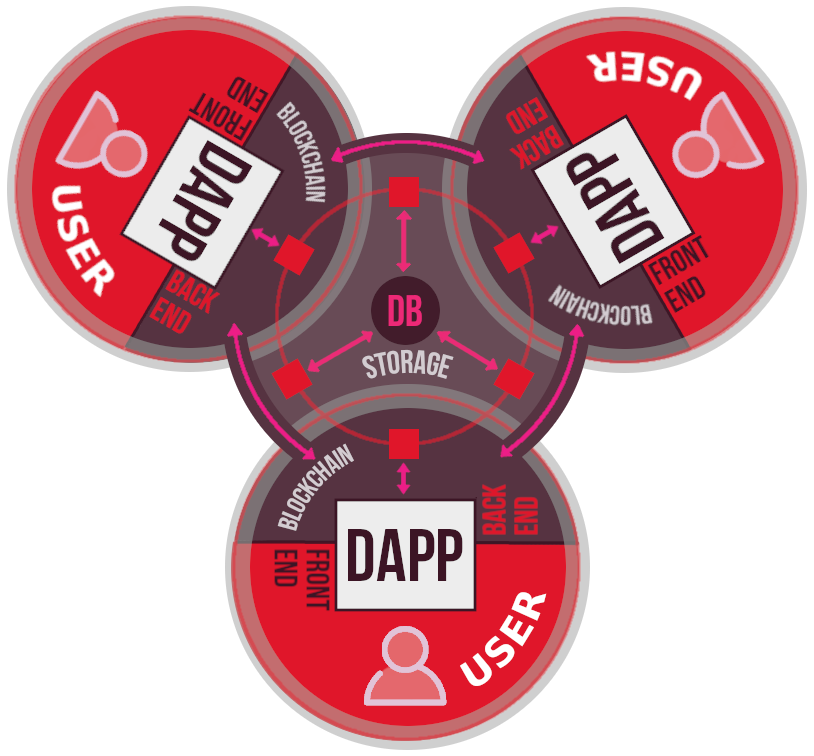 Filmgrid is a peer-to-peer platform for commerce, streaming and financing of independent films and series over the Internet. Of decentralized nature, removes all movie theaters and film distribution companies as intermediaries, allowing a fair distribution of profits among the film’s creators, which at the same time allows for a reduction to the cost of the offer to the public.

Filmgrid is an ideological project, seeking to create a business redundant platform that provides a fair innovative alternative to movie business; removing intermediaries from the creative and producing processes.

The application will offer all the services needed for this to be integral reality:

A movie marketplace where creative users may offer their movies, and viewer users can buy them and stream them.

A podium where film projects can seek funding either by obtaining it from the Filmgrid’s production fund, pre-sales or collective production.

A social network environment that promotes the connectivity between all the users and the spread of ideas.

Filmgrid will use the power of blockchain technology to manage transactions and hosting the smart contracts that will secure funds, voting, and other important aspects that make Filmgrid unique.

The whole point is to get here. It is well known that as many big industries, the movie business is far from being fair, FILMGRID constantly hear about movies making millions of dollars in the box office, but what we don’t hear about is that money remain in the intermediary’s pockets. Not to mention the shameless product placement movies are put through.

In a traditional Hollywood-like business model, income is produce with the sale of theater tickets, digital and physical video copies, licensing to SVOD services and others. The typical scenario for profit distribution will include a Recoupment Waterfall, an accounting technique designed to provide control to the middlemen, hence the manipulation of profit. 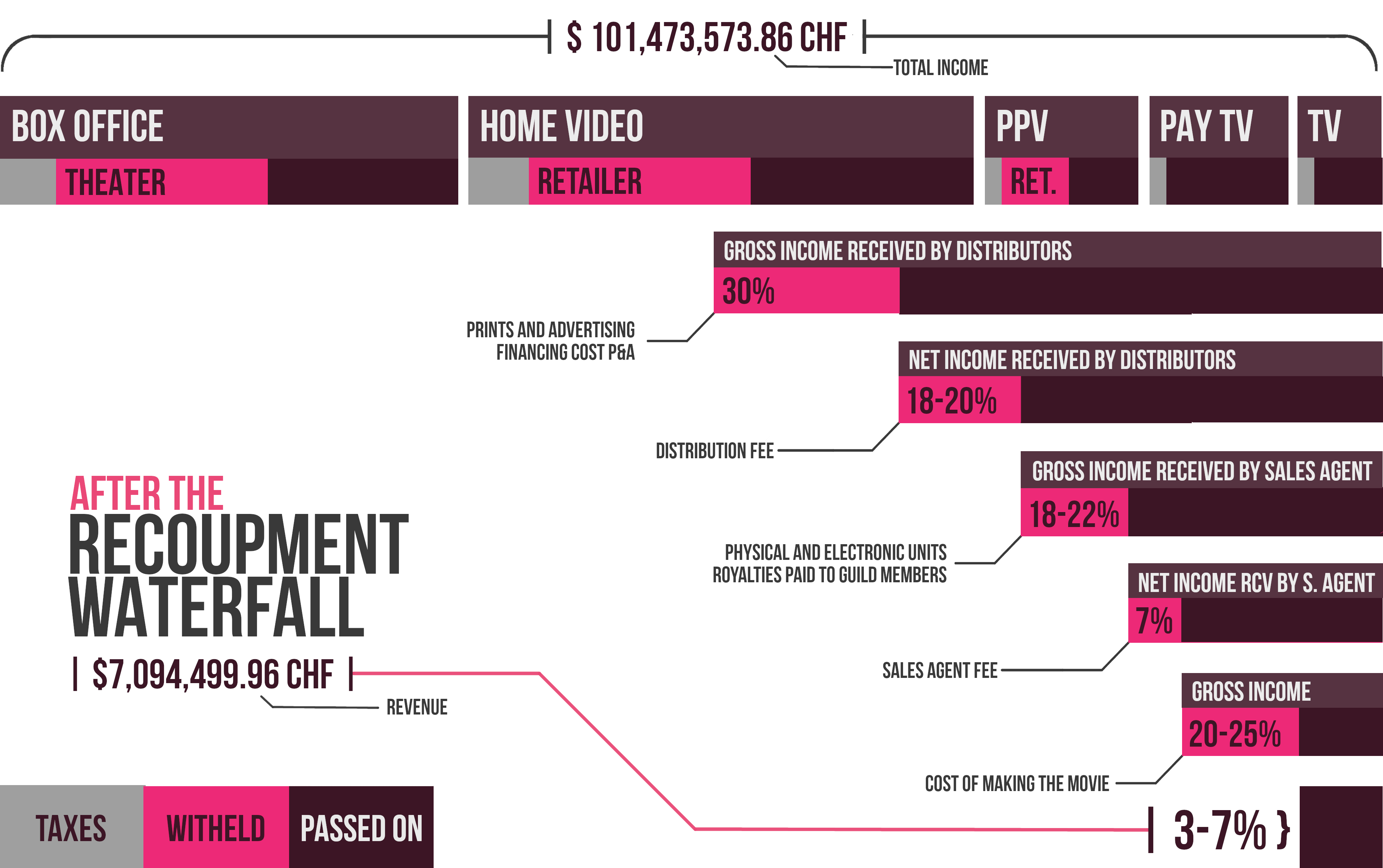 It takes a few years for the recoupment to be completed, the producers pool is the last to see any income. The producers pool is made not only by producers, but also by some creatives that negotiate a percentage of revenue, such as directors, writers, actors and others.

Every deal is unique for each movie, it depends in the names behind the project, but it usually respects the presented figures.

FILMGRID wanted to disrupt the industry? FILMGRID meant everything about it. FILMGRID come up with an innovative business model, cutting out intermediaries, aiming for the moviemaker to be the one who make the most profit.

In either case, Creative Users members of the Creative Team begin to receive income from the first sale. The decentralized application and the smart contracts will take care of all the automated operations and income distribution, respecting the configuration from the team registration.

FILMGRID have now the opportunity to offer the users, international movies at an accessible price for almost anyone; and at the same time, a fair alternative to movie makers.

The suggested prices for each sale option are:

With these prices and using the types of income of the typical scenario, we can run our hypothetical case, for the same movie, using Filmgrid.

Even though the total income was dramatically less than in a typical scenario, the revenue received by the Creative Market was bigger.

Filmgrid’s utility token, Filmpass (FILM), is designed to be the means of payment for buying and renting movies and series episodes within the platform. 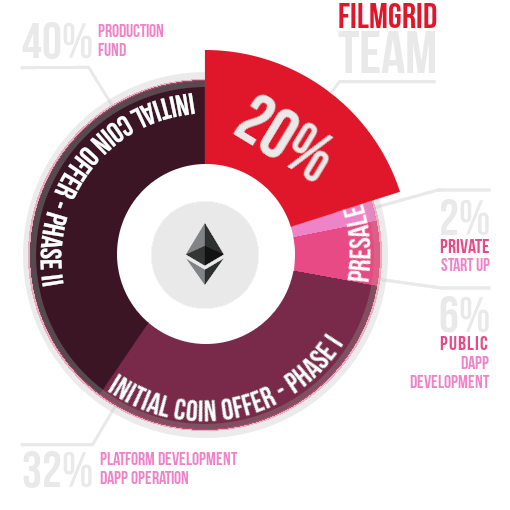 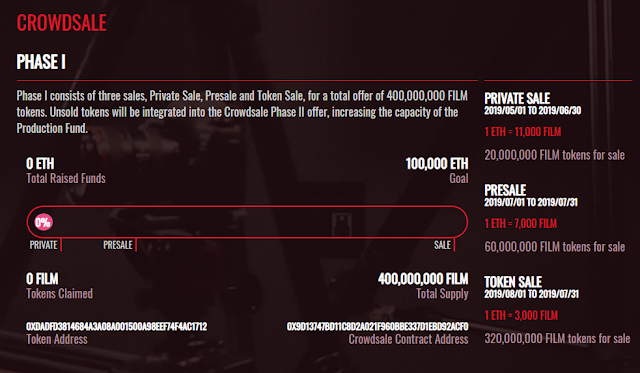 The tokens will be minted according to the dates and amounts of the distribution sales.

Applying our beliefs about movie industry in a fair business model.

This .space web site has been created to record and inform the project.

Structure and developing of our White Paper version 1.0.

Developing the DApp and Smart Contracts and public release of the code.

Minimum Viable Product with the Billboard and early Pitchboard.

Start the development of the Filmgrid Blockchain and configuration.

Well, all the work that has to be made to realease a top quality product.

Andrés is a Certified Bitcoin Professional (CBP) and holds the Linux Foundation X, Blockchain for Business Professional Certification. He has 7+ years of experience in Fintech business development, with a very strong knowledge in Regulatory Compliance.

Osvaldo is a true believer of science, numbers are his passion, and passion is his way. He is a person of deeply rooted ideology and practical experience, makes the project stronger and keeps us on track for Freedom of the Art.

She is an independent filmmaker with a broad and international experience in all types of movies, from short, to long films; she holds a Masters Degree in Cinematography Direction from Escuela TAI in Madrid, Spain.

With a Degree in Visual Arts and an Illustration Diploma from The New School of Design of Parsons, Stefie ads to the project a lot of knowledge when it come to talent management, professional equipment and production processes.

Alex holds a Bachelor of Law in Marketing Management from the Autonomous University of Nuevo Leon and is a certified Adwords expert. He saw the project as an opportunity to fully advocate decentralization as an ideology.

Founder of The Times of Crypto, Joboshi, and a top three blockchain ICO Consultant/Advisor in ICOBench and have extensive knowledge of ICO marketing, PR, and subject matter knowledge of blockchain and ICO. He has experience in participating in more than 40 ICOs.

Gina is a Certified Compliance Officer by the CNBV in México, expert in matter of Anti-Money Laundering and Countering Financing of Terrorism. With a keen eye to analize the available body of facts, nothing gets by her. She has 7+ years of experience in money transfer.

Oscar is data/storage specialist with a lot of experience in data centers, server infrastructure and cloud services. He has ventured into crypto mining, finding in blockchain a new passion along the way.