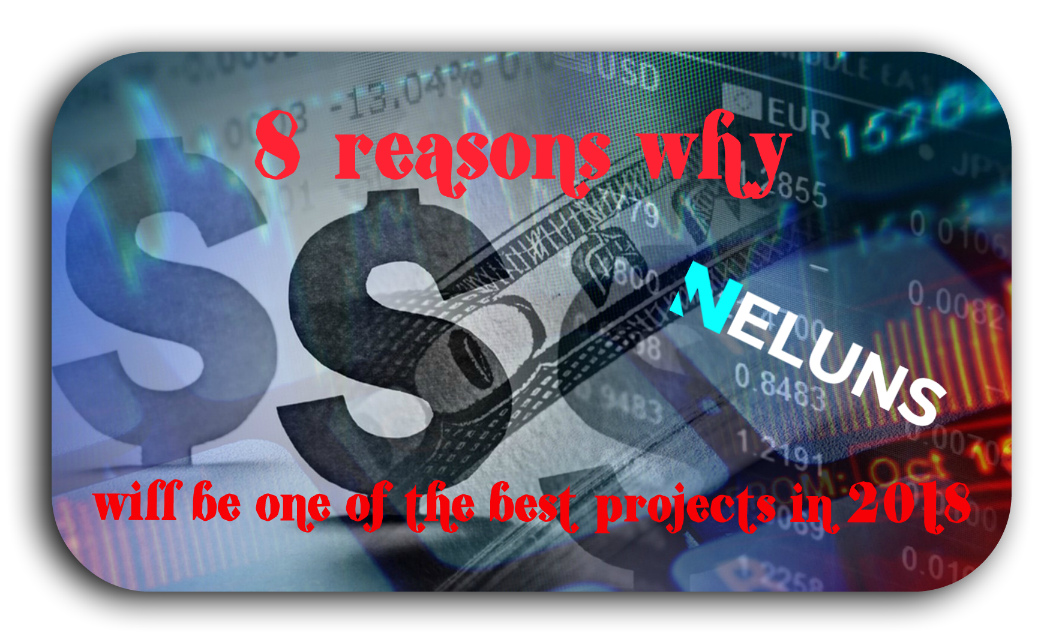 🚀Let's continue the conversation about the Neluns project - an innovative financial ecosystem that combines the generally accepted banking sector with a cryptographic one (you can read the beginning of my story here).

🚀Probably, you know what any cryptoinvestor dreams of because each of us is such? I won’t reveal a secret if I say that the time will come (I really hope that in the very near future), when cryptocurrency will be used by everyone and everywhere. This will automatically allow our assets to grow many times over, no less than ethereum since the time of the ICO. This is sure to happen, but only in the event that we will competently invest our money in powerful projects that will not die in a year or two, but will progressively develop, implementing all our plans.

And so, I invite you to familiarize yourself with my conclusions regarding the Neluns project.

🚀Fifty per cent of its own profits Neluns will distribute quarterly to its investors in proportion to the number of tokens withheld. I think that it is unlikely that a smart investor will want to abandon Neluns tokens if they are a source of constant profit. Does nobody refuse a goose that lays golden eggs, right?

🚀The release of Neluns tokens is only scheduled once during the ICO. There will be no additional issue. A limited amount will become the most important factor in the increase in demand and, as a result, in the price increase for Neluns.

🚀Holders of tokens will be rewarded with additional discounts and bonuses. It is not profitable to sell Neluns tokens. It is much better to keep them, use additional bonuses and watch the growth of the value of their assets.

🚀Soon after the end of ICO, Neluns tokens will be listed on all major exchanges - Bittrex, Huobi, OK-EX, HitBTC, Poloniex, Bitfinex, Binance, YoBit.

🚀The price of NLS tokens will grow with the growth of the capitalization of the platform. Is this not the main dream of the investor? Securely invest and watch the increase in the value of your asset?

🚀The creators of the project planned to reach $ 1,200 in NLS tokens by 2021 after an IPO on the New York Stock Exchange. You tell me - is it unrealistic? Do not be sceptics. This has already happened in the cryptocurrency world more than once, and it is Neluns that is worthy of repeating and surpassing the well-known examples.

Look at the visual image of the expression of prices for NLS, predicted by experts.

🚀The project has an already working product - Internet bank Neluns, where you can get any loan - from the minimum consumer to a large business loan at a profitable minimum interest.

🚀Neluns already has mobile apps for iOS and Android, which can be downloaded at play.google.com and apple.com/ios/app-store.

🚀Finally, plastic cards of the project will be issued with the support of Visa and Mastercard. This means that you can cash out and deposit money at any ATM that accepts these cards. Isn’t it a great breakthrough that dozens, if not hundreds, of projects tried to overcome, but whose efforts were not crowned with success?

🚀P.S. Summing up, I can assume that such a grand project has every chance to realize all the plans that had been planned and become one of the most successful projects of the second half of 2018. I hope that the conquest of world popularity is left to wait not for long.

The ICO of the Neluns project ends successfully on October 5, 2018. Anyone who has not acquired NLS tokens during sales can only wait for Neluns to go public.

My words are in no way a recommendation for action. Remember that investing in an ICO carries high risks (but, it seems to me, not in this particular case).

I wish you the right choice of project for investment, which will bring financial independence.

The author of the article:

@kleo-krypto author, I really like your pitch, continue in the same spirit. The project is good,
thanks to you now I will study it more carefully, for possible investment.

@lyssak, Thanks from the heart! glad you liked it!

@kleo-krypto Thanks for the review! I always read your blog and find interesting projects for myself.

@kleo-krypto projects which respect for people, they are in 99% of shoots. Thanks

@kleo-krypto I will be an investor of this ICO for sure. I believe in this project very much

@kleo-krypto I read about the project. I think it's interesting and promising. Many positive reviews and ratings.

@kleo-krypto An added advantage of this platform is that they did not stop with fiat and crypto currency, they have taken a step ahead in combining the giant like exchange and insurance platforms.

@kleo-krypto
interesting project, he did not hear earlier, thanks for your review, it is always a pleasure to read

@lionray, thanks from the heart! glad you liked it!