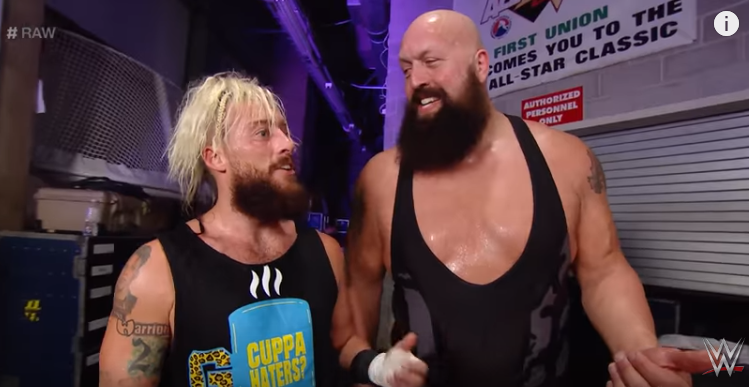 His name, is Enzo Amore, he was wearing the STEEM logo on TV. And you can't, teach, that!

Last night, 'Baby Face' Enzo Amore's partner, Big Cass, was injured, but he still had a match against a cuppa haters, 'Heels' Karl Anderson and Luke Gallows. So he ended up teaming up with seven feet tall giant, The Big Show to get the win. But the whole time I couldn't take my eyes off Enzo's ring gear, which had what looked like the STEEM logo front and center over. Whether it was just coincidence or not, the WWE Universe saw what they saw, and you can't, teach, that.

Batta Boom! STEEM in the room. How you doin?!

If you feelin fly, why not stop by twitter and tell these guys to hop on steem:

Stock Broker and Professional Wrestler, Marty The Moth followed me on twitter recently. I don't know why. But I am a "mark" for this awesome "heel" ever since I saw him at a Lucha taping in Los Angeles. So I went ahead and invited him into the @Steemit ring. Marty has been on WWE's Tough Enough and can currently be seen in movies and on the high flying Lucha Underground.

I once did an improv show called 'Kayfabe' with Wrestling One Man Empire, Colt Cabana. He has built an incredible career on the Wrestling scene. He hosts the popular wrestling podcast called "Art of Wrestling" where he he and wrestlers about everything and anything. He is a successful Chicago comedian who frequently teams up with hilarious stand up home boy, Marty Derosa and has toured with WWE Hall of Famer, Mick Foley. He has wrestled for just about everybody including the juggernaut that is Ring Of Honor as well as WWE, NWA, Lucha Vavoom, and geez I don't even know. I can't keep up with his hustle. I just listen to his podcast, you should too. So I invited him to Steemit!

One time Colt asked some of us to do a rock n roll wrestling show under the train tracks some place on the west side of Chicago. I don't remember where, but is was hella fun. Pictured below is me sans beard; Colt Cabana; improviser and all around awesome dude and dad Josh Breit; Beloved Gang Comedian, old friend, & new steemit member Peter Kremidas: and a guy I have a lot of respect for but can not say anymore about him or risk going kayfabe. They are all, Too Sweet!

Not pictured from that show is Pocket Thunder, another awesome Chicago Comedian, Pro Wrestling Announcer, and working for the new MST3K, Mystery Science Theater 3000. I had the honor of playing in Improvised Shakespeare and Comedy Sportz among other things with this goof. So yeah, I invited him to steemit.

Shout out to @pfunk and @theprophet0 who have helped me help my friends join steemit. And a shout out to @Steemtrail and Steem Speak who continue to build bridges for communities on steem. Respect!

some wrestling definitions:
baby face = good guy
heel = bad guy
marks = crazy fans like me
Kayfabe = If I told you, I'd have to end you....

...And we only getting started. Too Sweet!