Warhammer 40,000: Which Armies are Best for Scratch-Builders and Kitbashers? 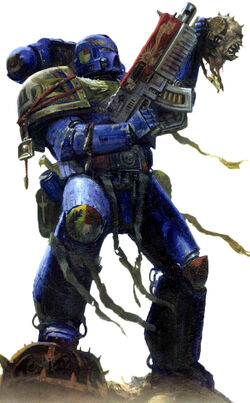 I think Orks are the best army for scratch-builders, but that doesn't mean they're the only army good for the chronically creative who might want a different army aesthetic on the tabletop.

The iconic army of Warhammer 40,000. The greatest fighting force in the Imperium of Mankind. The scalpel contrasting with the sledgehammer of the navy and guard. Genetically-enhanced super-soldiers wielding the best technology available.

There is a massive third-party industry full of customization bitz and alternate models, but an army with a relatively small model count and a background of literal religious veneration for technology requires uniformity. It takes skill to build well from scratch. That said, there are hobbyists who build truly amazing models. Not ideal for a beginner, but there is opportunity.

In general though, Space Marines are designed to be played with GW models, and customization is best limited to paint schemes and weapon loadouts within the restrictions of the Codex Astartes.

The numberless soldiers standing between the Imperium of Man and countless aliens. The bastion warding off literal chaos demons. The line of defense against rebellion. This is a great opportunity for customization.

There are literally millions of worlds inhabited by humanity. They all have their own customs and costumes developed over millennia. Games Workshop supports the Cadian and Catachan soldiers, with minor support now and then for other prominent planets in the fiction, but this army is tailor-made for anyone who wants to play human forces with a personalized twist.

Thanks to the wide range of 28mm infantry models ranging from World War II soldiers who can be upgraded with sci-fi weaponry to other model companies offering a complete range of miniatures, you can build any army you want to fit whatever theme you want! The only real caveat here is if you play in tournaments requiring Games Workshop models.

Your options here are currently as follows:

Until GW actually releases plastic models, this army must be converted or scratch-built by anyone on any kind of a budget. If these nuns with guns interest you, there's plenty of opportunity to build your army yourself!

The Tau are ideal for anyone who wants to build mecha models and use them as an excuse to roll dice and make your enemies weep as you shoot them off the table. If the idea of modifying a Gundam model appeals to you, or you like scratch-building stompy robots that look sleek and high-tech instead of cobbled together from scrap, Tau might be a good option.

And, of course, Tau are the go-to army if you want to shoot your opponent's army off the board on turn one. Jackass.

Immortal robot zombies whose basic infantry can kill anyone else's tanks. The basic paint scheme only requires silver spray paint, a black wash, and green details. And they are the source of perhaps the most [in]famous scratch build scheme: Sprue Crons!

There are also guides to build an army on a budget along with suggestions for non-GW models that can be converted to save some cash!

In short, Necrons can offer all manner of fun for anyone who wants to build an army from scratch, and using GW sprue means it's basically a free second army that gets around the tournament restrictions since they could be 100% GW plastic!

No pictures or model tips for you. If you're gonna play Space Elves, you deserve to pay full price for your models. Dick.

Do you want an army that eats everything it encounters and overwhelms its foes with sheer numbers but doesn't have the dark sense of humor that accompanies Orks? Here's your army!

Bug swarms offer opportunity to anyone who wants to re-imagine an official army, provided you can ensure each unit is easily identified as what it replaces. Basically, the world is wide open to you if you like these guys. And like the Orks, they have a chance to get a big boost in the new edition when their rules are updated from a very lackluster army codex.

Here's where the customization options really explode. The four chaos gods offer any manner of inspiration to the scratch-builder and model converter. Not only are the soldiers and equipment of the Imperium fodder for corruption, but gamers have done everything up to and including modifying baby dolls into Nurgle demon princes in their quest to develop unique armies. Green stuff and plasticard allow all measure of customized models, and any of the suggestions pointed out for Imperium forces can also be corrupted for Chaos, too. Next to Orks, the four primary Chaos factions and Chaos Undivided are the best option for the creative scratch-builder who wants to build an own army like no other.