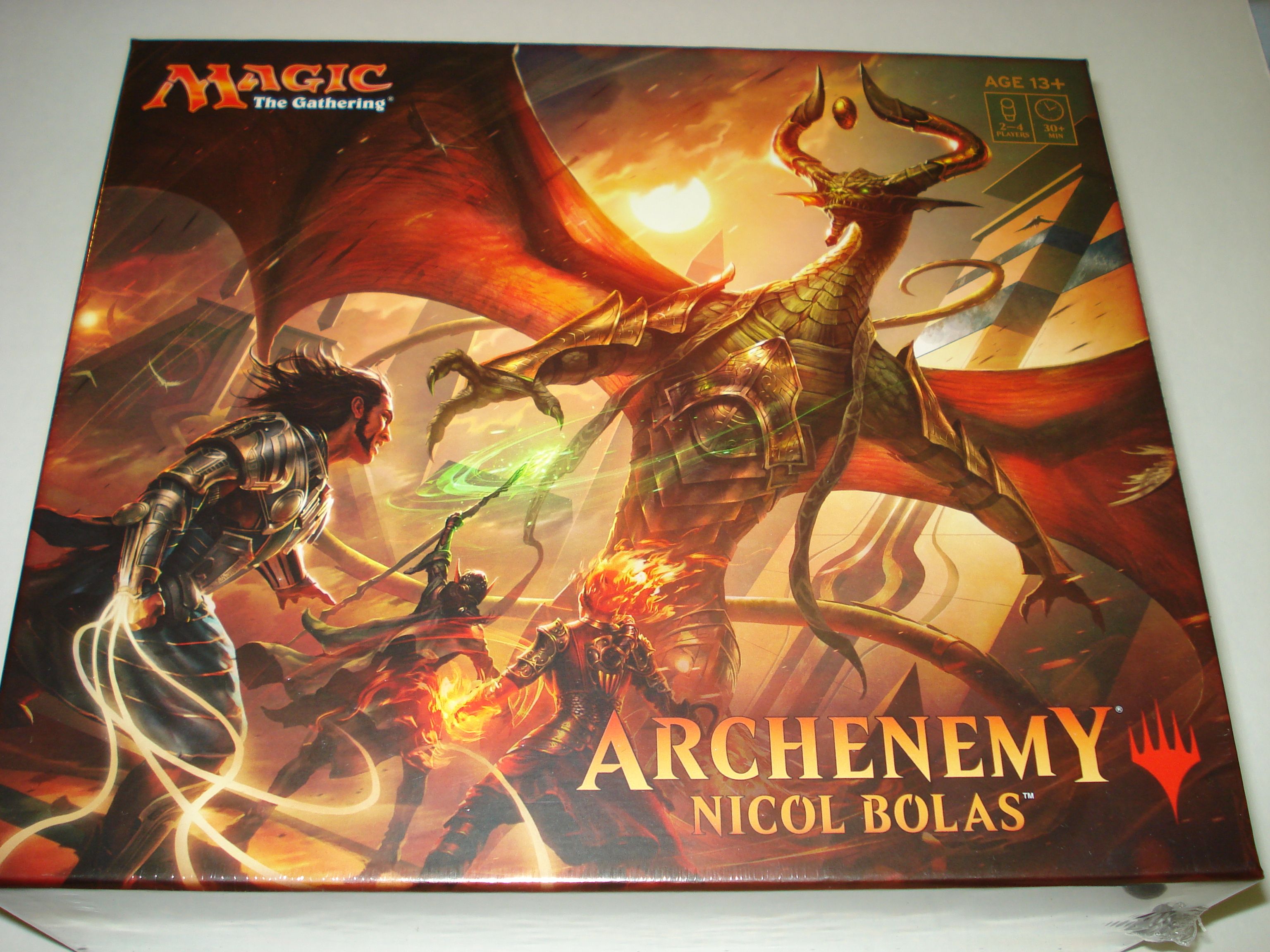 When I posted my unboxing and preliminary review post, I said I would comment on card sleeves and what it was like to actually play, so here we are!

The Planeswalkers didn't all get a chance to make their appearances in the two games I have played thus far, but Nissa was responsible for my co-worker K's win over my Nicol Bolas Archenemy strategy. I had wiped out her husband T, and was prepared to destroy her along with their friend C. I neglected to account for the special Archenemy rule that allows the three Gatewatch players to block for one another though, and C used his sole creature to cover K and keep her in the game with one life point, allowing her the extra turn she needed to unleash Nissa's ultimate and thoroughly trample me as she snatched victory from the jaws of defeat. It was an epic moment even if it did extend her unnatural game night win streak.

While shaking fist: Nissa! You shall pay!

In the second game I earned a victory, but Son of K took her place for that round, so my vengeance is incomplete.

I did like the way the scheme deck let me get extra bonuses, steal stuff from my foes, and generally be a jerk. Its bonus to each turn definitely makes the Archenemy player feel like a demigod compared to the mere mortals he faces. I don't think I have played nearly enough to see how well the Gatewatch decks play individually or as a cooperative synergy, but there seems to be quite a bit of potential if the players coordinate effectively. All told, it strikes me as a good balance of benefits and drawbacks for a competitive game. If you like magic, I'd recommend it on its own merits.

Beyond that, though, this game adds all kinds of new potential on top of that. Pick up a couple different Duel Decks sets and you suddenly have four more completely new decks to try in the format. Build your own decks from your collection if you want to completely customize it. Use the Scheme deck for a new slant on 4-player EDH. The rules allow a completely new experience for whatever format you like.

There is a downside for some players. These cards are not legal in standard Friday Night magic tournaments using the recent release sets. I don't think there are any "must buy" staples for those who play Modern or Frontier formats to make this set worth picking over on its own. There are some fun potential cards for Commander, but EDH players are probably better off buying singles unless they really need a lot of cards in the set for a specific deck or two.

When I bought this game, I also decided to grab some card sleeves that were on clearance at miniature market. These are Dek-Prot brand, gloss finish. They seem reasonably sturdy, and they did contain exactly 60 sleeves as they advertised, which was perfect for the four 60-card decks in the Archenemy set. I am rather protective of my cards and suspicious of other players, so sleeves are a must for me. The colors were chosen to identify the decks with some extra flair, too. Nissa got green sleeves, Chandra got red, and Gideon got white, obviously, and I decided to go with brown for Nicol Bolas. In use, they shuffle well. Durability remains to be seen, but they don't feel like junk so far.