An idol is an object treated as a representative of a deity and used as an object of worship. Sometimes it is even treated as a literal manifestation of the deity. It may be a statue, a painting, or any other object of veneration.

A cult is a bit harder to define, since the word is used to describe anything from a secretive and insular religious sect to the following of a pop culture phenomenon, but for my purposes I will use it in the sense of a subculture that engages in psychological manipulation of its members.

It is my intention to suggest that many people hold beliefs that are more akin to idolatry and cultism than to rationally-explored principles. As an example, I present this image: 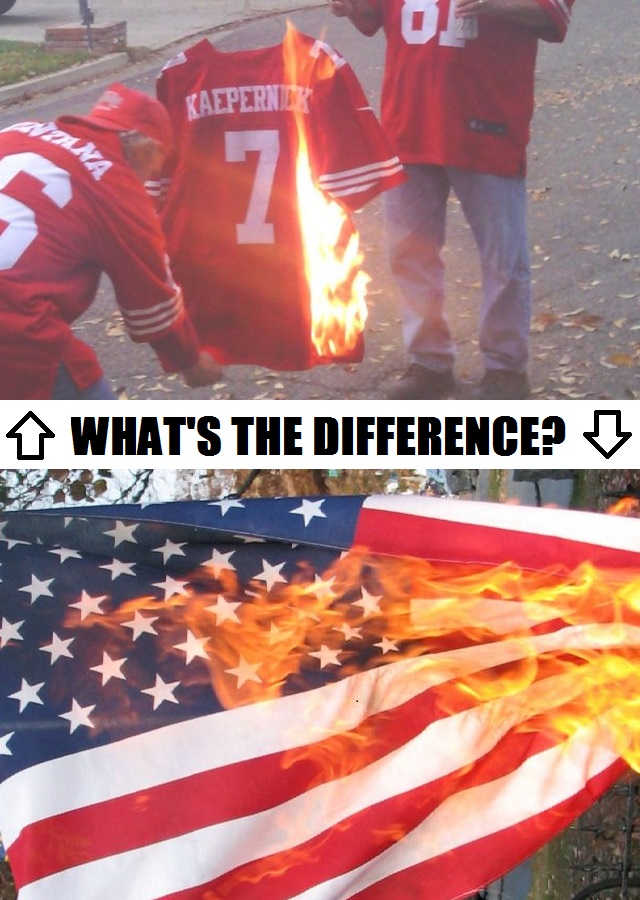 If you think there's a difference between the pieces of cloth, you might be an idolater in a cult. Is this too extreme? Well, let's explore the concept and see how accurate it is.

The Flag and Idolatry

A flag is just a symbol. It can be claimed to represent anything. Anyone can wave it. It has no inherent meaning. However, many people believe a flag represents their highest ideals. To them, the flag IS liberty, justice, family, and society. To harm the flag is to attack their core beliefs. If that is not idolatry, what is it? After all, if the flag represents liberty, how is the principle harmed by its exercise in handling an instance of its symbol you happen to own? But the flag idolater would trample the principle for the sake of the symbol.

National flags are always defined under government law as a symbol for government, so it would be accurate to say that a flag represents a government. However, do governments represent the people they govern, and are nations akin to cults?

The Cult Education Institute is an organization with an admittedly dubious reputation, but the following ten warning signs of a potential cult seem like a reasonable benchmark nonetheless:

How does government (any government) fare? Every government throughout history fits the vast majority of these warning indications, and most are a perfect fit for all 10 to one degree or another.

Lysander Spooner covered this matter in extreme detail when he wrote A Letter to Grover Cleveland, which was published in 1886. An excerpt is included below:

You say that "every voter exercises a public trust."

Who appointed him to that trust? Nobody. He simply usurped the power; he never accepted the trust. And because he usurped the power, he dares exercise it only in secret. Not one of all the voters who helped to place you in power would have dared to do so if he had known that he was to be held personally responsible for the acts of those for whom he voted.

Inasmuch as all the votes, given for you and your lawmakers, were given in secret, all that you and they can say, in support of your authority as rulers, is that you venture upon your acts as lawmakers, etc., not because you have any open, authentic, written, legitimate authority granted you by any human being,—for you can show nothing of the kind,—but only because, from certain reports made to you of votes given in secret, you have reason to believe that you have at your backs a secret association strong enough to sustain you by force, in case your authority should be resisted.

Is there a government on earth that rests upon a more false, absurd, or tyrannical basis than that?

Whether you are religious or atheist, an honest examination of the issue must at least raise the possibility that veneration of the flag is idolatry, support for government is cultish, and representation is a lie used to perpetrate fraud.