Green Stuff is great stuff for any kitbasher or scratch-builder. It's a modeling epoxy. You combine yellow-colored part 1 and blue-colored part 2 until they are a uniform green. Then you sculpt it, mold it, use it to fill gaps, and otherwise be creative. It has adhesive properties too, although it's not a substitute for glue.

Above: The Army Painter
Right: Uriginal%20Green%20S

Small quantities can be purchased in strips as shown above. Slabs of each color are glued together. The best way to use it is to cut off however much you need to mix, and then cut out and discard the thin strip where they join.

The green stuff I bought bore a Gale Force Nine label at my local game shop, and came as two plastic-wrapped tubes of putty for USD $20.00. 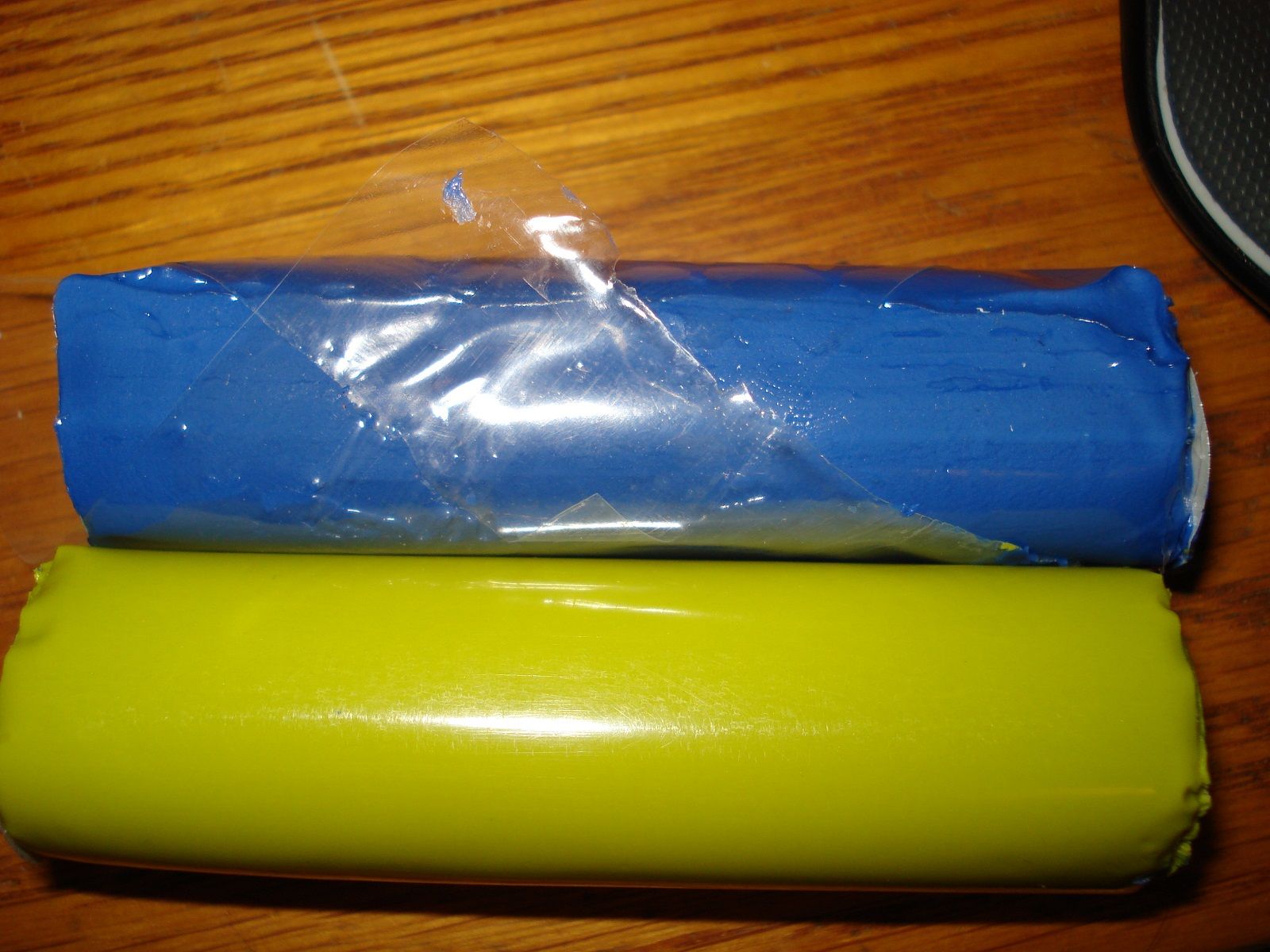 I cut a small chunk off the end of each tube, formed roughly-equal blobs, and then twisted and kneaded the colors together for a couple minutes until it was a uniform green. This stuff is sticky. I have read a lot of suggestions to keep the stickiness factor down, and none have worked well for me yet. I need to experiment a lot more before I give any advice of my own. 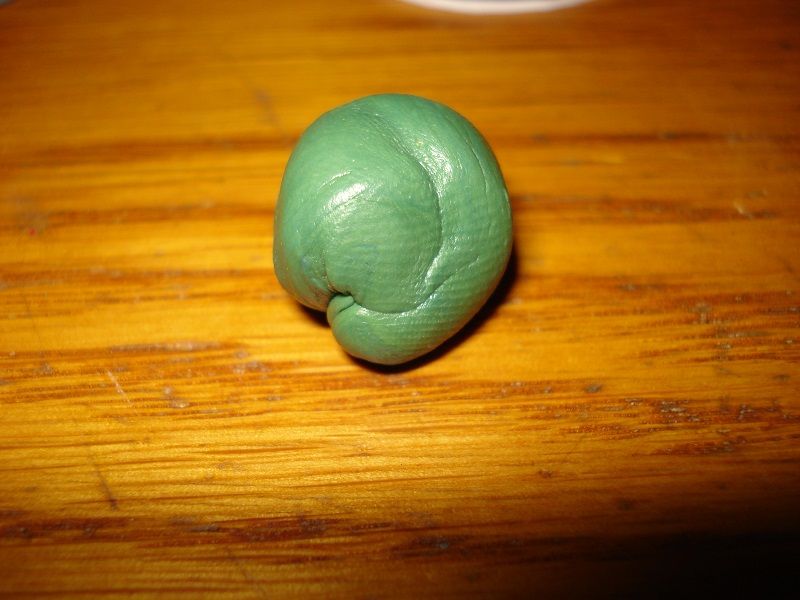 The first project was reinforcing the 40mm base expansion for the Flash Git. I changed my mind about using the washer, and went for a plasticard bottom cover instead. I tore a smaller blob of green stuff off, rolled it into a snake shape, and tucked it between the plasticard and base. Then I made a royal mess trying to push it under the edge and form a nice wall. Had I not been so impatient, I would have placed green stuff first, then added the card, and only tried to finish the surface after. Live and learn. Oh, well. 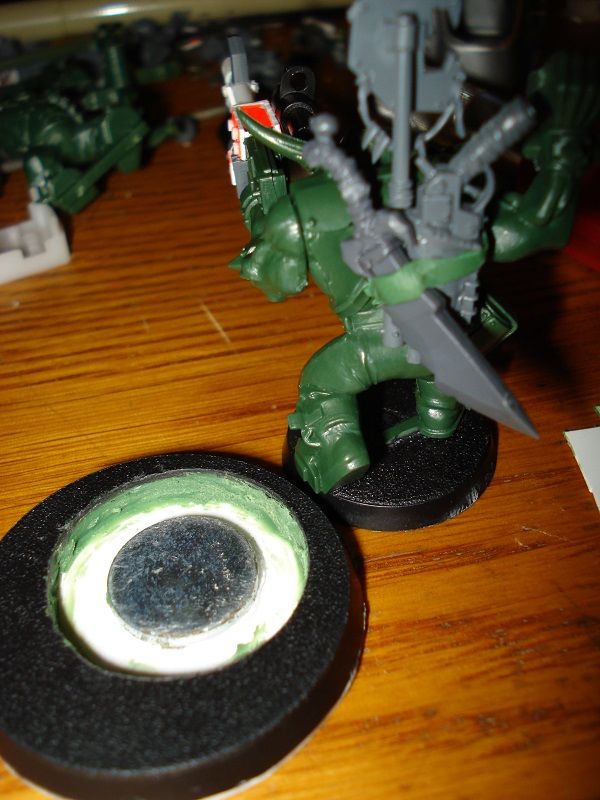 I also drilled an oversized socket in his back to attach a green-stuff-secured bosspole, and added a slugga and choppa with a green stuff strap.

After that, I started building a Nob with a Big Choppa by adding the axe head I clipped from the Flash Git's fist to a Big Choppa arm from which I had clipped the chain axe head in a pre-Steemit project. I pinned these pieces together by drilling holes in each piece with the pin vise, and then using a bit of paper clip and super glue. 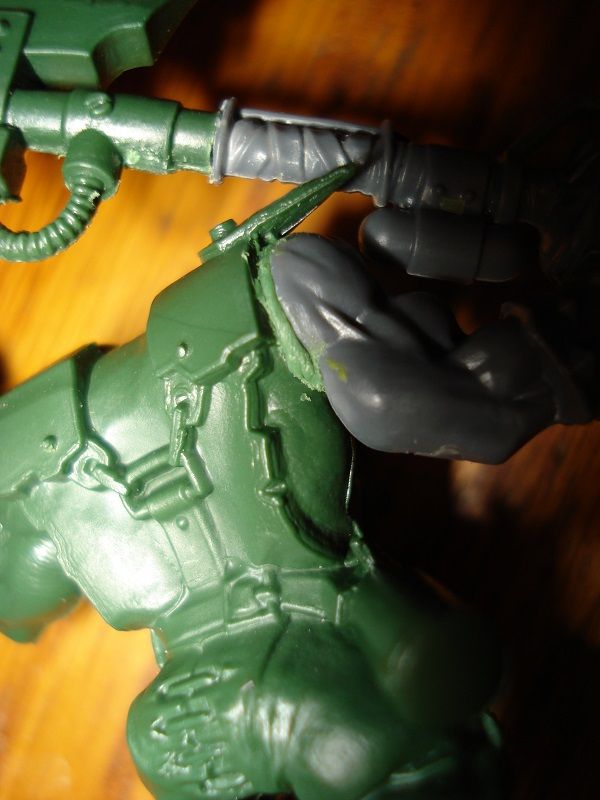 I also drilled an oversized socket in the arm to allow room for positioning, and used green stuff to fill the socket and bridge the gap between the pieces that weren't designed to fit. This will require some carving and filling to clean up the joint, but it works. I also used a glob to mate the ball-and-socket standard Nob kit head with the simplified assembly join on the torso from this quick-build kit. 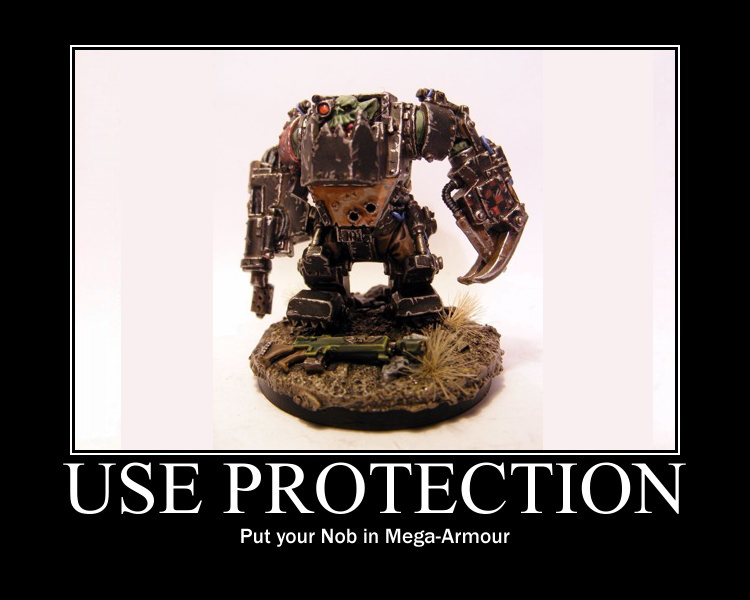 I decided to go ahead and start building a new Meganob as well. He's supposed to wear a big suit of power armor, carry a power klaw in one hand, and carry a big gun in the other hand. I cl-molded arm and pinm his pre-molded hand and pinned a customized power klaw onto the stump. Proppa orky serjery, that. This is another model where I decided to use a head from the standard Nob kit secured with more green stuff, too. 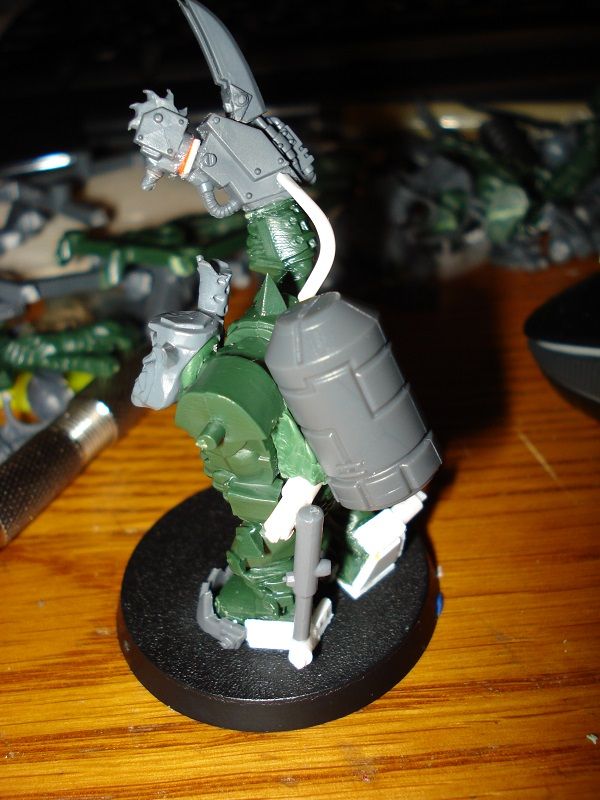 I also started building up the armor using plasticard, styrene tube, clipped bosspoles, iron jaw accessories, and a Mantic barrel sawed from a trio in the excellent Deadzone Accessory Sprue affixed with green stuff. More plasticard armor will be built up as I decide how it should evolve, and green stuff will possibly come into play again before I'm done.

A little bit of Green Stuff goes a long way. I had to find a way to use up the surplus I had mixed after the projects pictured above, and I remembered reading a blog post somewhere about using green stuff to make backpacks for Ork Kommandoz.

I wrapped a stikkbomb and choppa, stuck on some pouches, poked at it with a paper clip to gove the impression of strapping creasing the bundle, and poked a dent to give the appearance of a button. Then I rolled a smaller bundle and just slapped on a double pouch.

All uncredited photos taken by the author.
* This article was previously posted on Steemit.