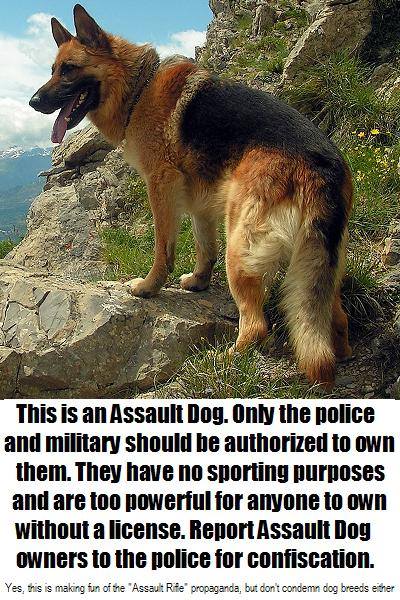 The First Amendment clearly doesn’t apply to fully-automatic word processor programs and high-capacity inkjet printers. Think of the children! Any crazy person can buy one of these machines and hose down a street full of innocent people with hundreds of leaflets, all with no oversight! How could anyone argue that the Founding Fathers meant to protect THIS?

Yeah, that was sarcasm.

Rights are not dependent on the level of technology or old documents written by long-dead men. Natural rights theory explores the universal and reciprocal spheres of individual authority. I have the right to life, liberty, property, and the pursuit of happiness within the sphere where I do not trespass against the equal rights of others. In short, this is the basis for the concept of self-ownership, because no one has a higher claim of authority over myself, my actions, and the consequences of my actions.

Text by the author, image via Wikipedia

Rifles are property. They can be used to defend against the trespass of my rights without infringing on the equal rights of others. They have no inherent attributes that could violate the equal rights of others. I can and do use a rifle without harming others. Guns bans are a claim to a "right" to trespass against my life, liberty, and property. In order to enforce any prohibition policy, you must threaten peaceful people with harm and carry out the threatened harm should they disobey. "Common-sense regulation" is sophistry to excuse bans based on arbitrary features that have nothing whatsoever to do with the root causes of violence.

Even if we accept the constitutional arguments, the presumption is that governments exercise rights delegated to it by "The people," so government cannot own or do anything I cannot own or do on my own.Even if we set aside that argument about the nature of governmental authority, there were repeating arms prior to the Second Amendment, and private ownership of literal artillery was not unknown at the time.

Argument 2: But "assault weapons" should be illegal!

Machine guns and assault rifles are not technically illegal, but they are already heavily regulated and obscenely expensive.

AR-15 rifles are not assault rifles or machine guns. They are merely carbines made from modern materials and with better ergonomics than older carbine designs. The "AR" does not stand for "assault rifle," it refers to the original manufacturer ArmaLite Rifle Model 15. The non-military AR-15 has always been semi-automatic only except for a few models produced prior to 1986 as discussed below, and the trigger mechanism used in the typical semi-auto-only AR is very different from that in the military select-fire M-16.

Even if we suppose that assault rifles should be banned, they have a specific definition within the firearms industry. They are select-fire rifles, meaning they can be switched to allow multiple rounds to be fired with each trigger press. As such, they are covered under the National Firearms Act of 1934, a law that is now nearly a century old. Following the National Firearms Act, which was imposed in response to the violent crime that grew out of the prohibition-fueled black market in alcohol and the scourge of yellow journalism, in order to own an "NFA item," a $200 tax stamp (Equivalent to over $3,000 today back in 1934) and extensive background check was required before being "allowed" to own what had previously been completely legal.

While machine guns and assault rifles are not technically illegal under the NFA, they are obscenely expensive. The cost of such firearms has become astronomical if legally acquired due to the additional hurdles imposed by the Gun Control Act of 1968 restricting importation of firearms the government does not deem "suitable" and the Firearm Owners Protection Act of 1986 forbidding the manufacture of any domestic machine guns for civilian purchase. Thus, even though inflation has reduced the impact of the statutory $200, the restriction in supply means that even "cheap" fully-automatic rifles or legal conversion kits cost thousands of dollars and are very difficult to obtain even after jumping through the governmental hoops due to a very small supply on the market.

The Clinton-era Federal Assault Weapon Ban only covered cosmetic and incidental features of semi-automatic carbines, and restricted ownership of an arbitrary list of rifles. It had zero effect on actual assault rifles, instead merely turning people into "criminals" of they neglected to follow any arbitrary regulations during that era. Of course, none of the above laws stopped the violent criminals associated with the modern black markets resulting from drug prohibition from acquiring machine guns if they want to. After all, they deal in illegal drugs, so their smuggling or cobbling together "illegal" weapons shouldn't be a surprise.

There is no correlation between gun ownership and mass shootings or murders.

Mass public shootings are not unusually common or unusually deadly compared to Europe despite the typically highly-restrictive gun laws across the pond.

Crime rates across the US have been trending downward for over 25 years according to the FBI's comprehensive. This includes not only murders, but also rape, robbery, aggravated assault, and non-violent crimes like burglary and theft.

Mass murders tend to occur in cities or venues where guns are essentially outlawed for the law-abiding. Cities with strict gun control laws like Chicago and Washington, D.C. have very high murder rates compared to the rest of the country. Of course, urban centers are also hotbeds of black market activity, along with the violent crime resulting from prohibition. Cities also tend to have heavy economic controls that act as a barrier to entrepreneurial activity by the poor. Urban police are also notorious for racism and brutality, even further exacerbating the violence and unrest in such places. Banning guns does not protect people, especially since it is proposed as a solution to problems rooted in completely different areas instead.

Argument 4: Those guns have no sporting purpose, and are only designed for murdering people!

The ergonomic design and low recoil impulse of an AR-15 make it a favorite for target shooting. Contrary to the popular media line, the AR-15 is not a "high-powered rifle."

A .223 Remington or 5.56x45mm NATO cartridge is generally considered marginal for deer hunting, and some states forbid so small a bullet diameter for such hunting, but a well-placed shot can still humanely kill even a mule deer buck. It is certainly a good round for coyotes, prairies dogs, jackrabbits, and other varmints or smaller game.

Beyond that, the AR-15 platform is highly modular, and the upper receiver—the section with the barrel and bolt—can be easily replaced with a wide variety of alternative calibers. Along with .223/5.56mm, popular alternative calibers include 5.45x39mm, .300 Blackout, and 7.62x39mm. The latter two are arguably sound choices for deer.

Several shooting sports revolve around modern sporting rifles like the AR-15, especially multi-gun competitions. The modernity of neither the firearm nor the sport are cause to de-legitimize either one.

The features of the AR-15 often cited as "assault weapon features" serve practical purposes for everyday firearm owners. None of these features alter the actual function of the firearm or make it more deadly.

And lastly, in the event one needs to use a firearm for self-defense, an ergonomic carbine with a full-capacity magazine can serve quite effectively, and it certainly can kill people or wildlife that are trying to kill you. It is absurd to conflate self-defense with initiatory aggression to declare both parties equally guilty, and no one in his right mind intentionally provokes predators. Don't blame the victim, and don't pretend disarming potential victims could ever protect them.