Lords of the Realm II - One of the Best Strategy Games Ever! 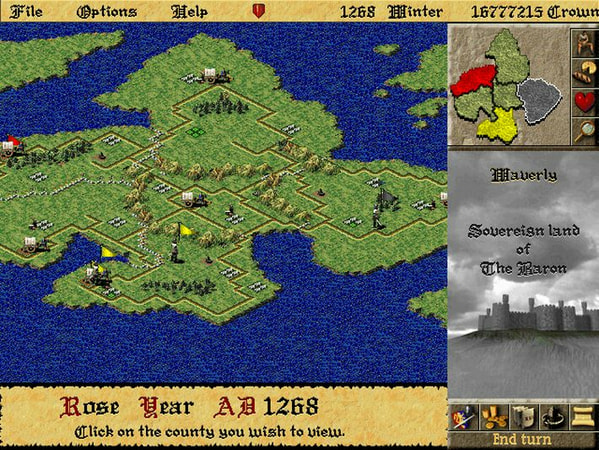 I first bought Lords of the Realm II at Wal-Mart in about 1997. It was packaged in a giant cardboard box that dwarfs those used for software today, assuming you even buy physical discs for your software. This classic strategy game is now available through GOG.com, so you can experience this game like I did about 20 years ago! The only thing you'll be missing is the gorgeous game manual.

The game opens in a turn-based world map view. The maps may be based on real geography, such as England or France, or an abstract mass designed for game purposes. Each player starts in control of one county, and needs to administer his or her land for each season of the year. This involves setting taxes, planting grain, managing cattle herds, harvesting resources, making weapons, and building your keep. Merchants travel from county to county, so you can sell your surpluses for coin, or buy needed goods. If you hire mercenaries or raise an army, you also move your soldiers around the world at this time. This map changes to reflect the prosperity of the county, and as the turns progress, the seasonal changes are also reflected.

If your army crosses paths with a foe's force, you attack an unfortified county town, or besiege a castle, the game switches to a real-time strategy battle map. The number and quality of your soldiers along with your skill in maneuvering them determines your success or failure.

It is advantageous to build the best castle possible in any counties likely to endure invasion. There are up to 4 rivals for power that must be defeated in order to gain victory. The Bishop likes big castles and conscript armies. The Knight is an arrogant and belligerent buffoon who can catch you off guard, but doesn't play defensively. The Countess is a backstabber. The Baron is generally an honorable foe, but he tends to wring as much out of his people as possible, meaning his lands and peasants are in poor shape when you defeat him. If you use diplomacy unwisely, they will all attack you sooner rather than later. It can be beneficial to forge alliances, pay some bribes, and sic one of your foes on another to ensure some breathing room.

The AI in this game is a little lackluster, but remember that it was released way back in 1996. The foes are usually predictable, so unless you are outnumbered, it becomes better to auto-calculate the outcomes of all non-siege battles for the sake of time. For a siege, the best tactic depends on the castle you are attacking, so I would simply advise experimentation on that front. Catapults knock down walls, siege towers let you send men over the walls, and battering rams break down gates.

I do advise keeping some dedicated pikemen for digging through moats when laying siege, because their superb armor makes up for a lack of mobility. When on defense, a mix of archers and crossbows can protect you from an invader's attempts to dig through, and a small squad of swordsmen can usually handle any siege towers that manage to get close or defend any broken gate. Build up to a castle with a moat as soon as possible, and you can defeat any AI attack with archers and crossbows alone.

In regular combat, it's often a good idea to keep some cheap macemen to handle archers or masses of peasants. They are the fastest foot soldiers available, and are great for flanking unarmored foes. Avoid using unarmed peasants yourself. Swordsmen are usually best for defending your own missile troops, since they move faster than pikemen. Once you have a secure supply of resources, knights can be a great option, but they are not cheap at all.

Of course, all of this goes out the window if you play against another human being. Alas, I didn't have a good internet connection back when this game was new, so I never played much online. I think this is a game that needs a re-release with better graphics and AI along with a good multiplayer matchmaking system. This classic should be reborn! For now, though, the bundle with LOTR, LOTR2, and the LOTR2 Siege Pack from Good Old Games is a good substitute.

Images are all from the gog.com store page for the game.