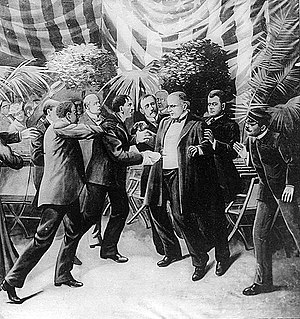 McKinley initially appeared to be recovering, but took a turn for the worse on September 13 as his wounds became gangrenous, and died early the next morning; Vice President Theodore Roosevelt succeeded him.

William McKinley Jr. (January 29, 1843 – September 14, 1901) was an American politician and lawyer who served as the 25th President of the United States from March 4, 1897 until his assassination in September 1901, six months into his second term. McKinley led the nation to victory in the Spanish–American War, raised protective tariffs to promote American industry, and maintained the nation on the gold standard in a rejection of inflationary proposals.

https://en.wikipedia.org/wiki/Francis_Delafield
Francis Delafield in 1886, he became the first president of the Association of American Physicians.
Attended William McKinley
Francis Delafield was the primary physician who was consulted following the shooting of United States President William McKinley in September 1901. While Francis argued to use the X-Ray machine to photograph McKinley's organs and assess the damage, he met opposition from others unwilling to use the new technology. Some attribute this inaction to contributing to McKinley's ultimate demise.
On January 17, 1870 Francis Delafield married Katherine Van Rensselaer, the daughter of Henry Bell Van Rensselaer and the granddaughter of Stephen Van Rensselaer III.

A number of noted music historians and authors, including Richie Unterberger, Ric Menck, and Peter Buckley, have suggested that the crowds of young Bohemians and hipsters that gathered at Ciro's to see the Byrds perform represented the first stirrings of the West Coast hippie counterculture.

Laurel Canyon found itself a nexus of counterculture activity and attitudes in the 1960s, becoming famous as home to many of L.A.'s rock musicians, such as Frank Zappa; Jim Morrison of The Doors; Carole King; The Byrds; Buffalo Springfield; Canned Heat; John Mayall; members of the band The Eagles; the band Love; Neil Young; and Micky Dolenz & Peter Tork of The Monkees. Tork's home was considered one of Laurel Canyon's biggest party houses with all-night, drug-fueled sleepovers well attended by the hippest musicians and movie stars of the era.

John Phillips of the Mamas & the Papas took inspiration from their home in Laurel Canyon in the song "Twelve Thirty" a.k.a. "Twelve Thirty (Young Girls Are Coming to the Canyon)", released in 1967.
https://en.wikipedia.org/wiki/Laurel_Canyon,_Los_Angeles