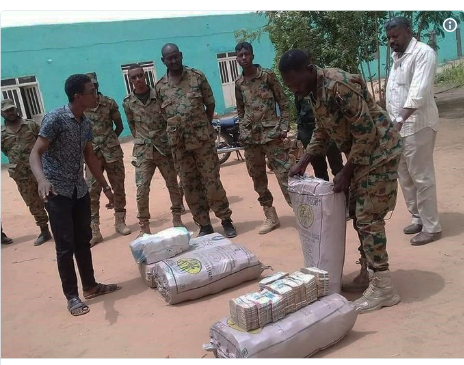 Omar Al-Bashir was toppled from the Sudanese presidential seat on April 11th this year by the Sudanese Military is being investigated for money laundering as over $130m was found in his home. Who said Africa was poor.

Suitcases loaded with $351,000, €6m and 5 billion pounds were found stashed in Omar Al-Bashir's home. A picture showing men standing of several sacks of cash has been circulating online.

Many people in Sudan have been protesting for months now and finally, the military took action and placed Omar Al-Bashir under house arrest. Mr Bashir has ruled for close to 30 years and he is wanted by the International Criminal Court for alleged war crimes. The military has however refused to extradite him and has said he will be tried in Sudan.

Protesters are still on the streets of Khartoum, the Sudanese Capital braving scorching hear and fatigue demanding that the military hand over power to a civilian administration. The military is yet to hand over power as they've not agreed on proposals that seek to dismantle state intelligence agencies.