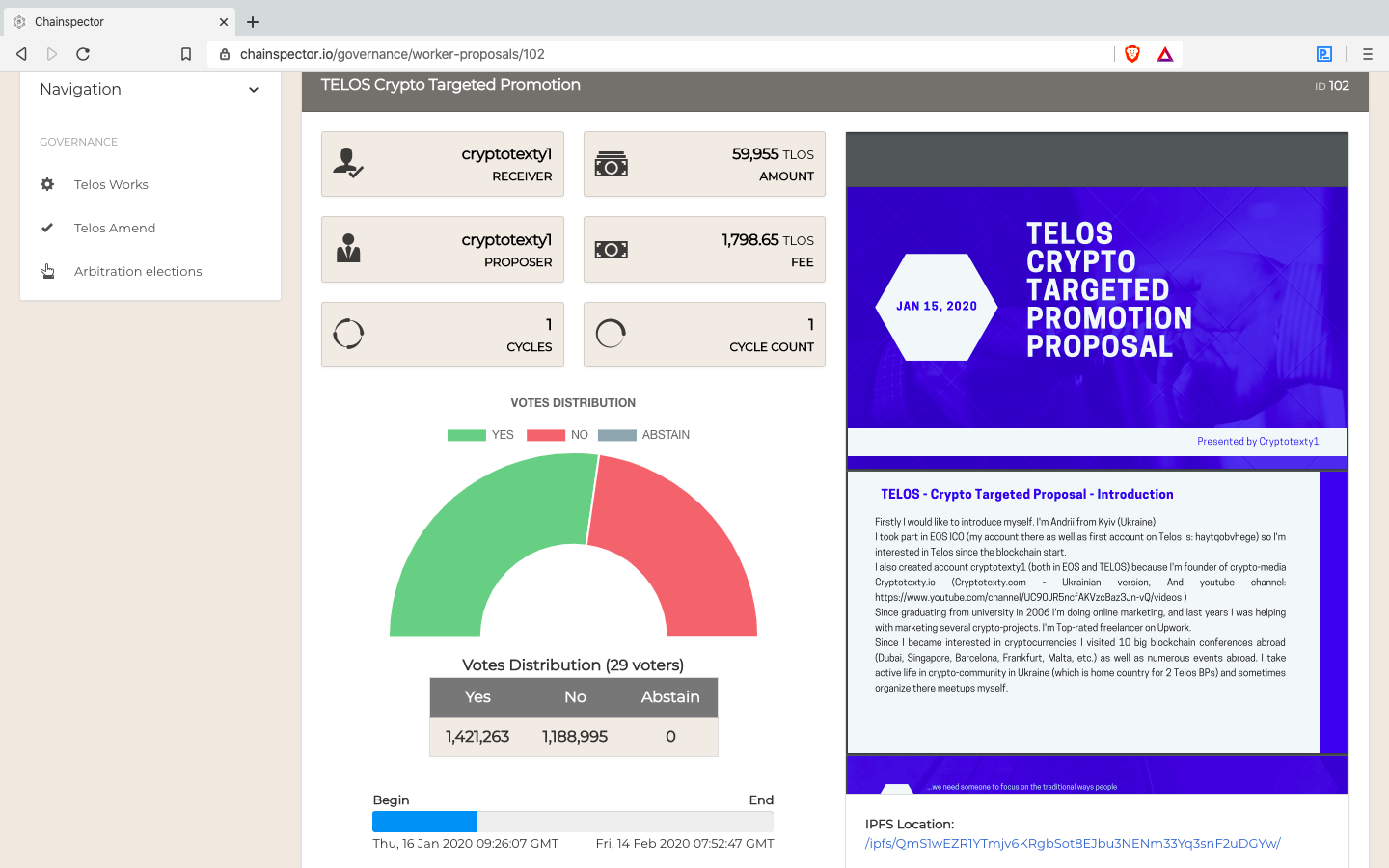 There are many things why crypto enthusiasts might like Telos. Some like the fact that Telos took all the best aspects of EOS, but doesn't experience CPU problems. Other like the fact that in Telos you can earn 18%+ APR staking TLOS at REX, and because Telos is much cheaper than many other cryptocurrencies, so it looks like good investment opportunity.

But I want to focus on Governance aspect, which I discovered and checked only recently. Like other EOSIO networks, in Telos token holders vote for block producers, but also after developing The Telos Economic Development Plan each month 1 million TLOS is dedicated to Telos Worker Proposal System (WPS), where everyone can submit any project and achieve funding if the community will support it by voting.

How WPS works I will explain on my example. After reading for weeks Telos telegram I understood that there is a need for crypto-targeted promotion. So after checking the existing proposals and proposals which very approved and denied, I created pdf of proposal and submitted WPS in Sqrl wallet. For submission I needed to pay 3% of requested amount, 1798.65 TLOS - so it took me some time to buy additional Telos at the exchange. I think it's a good idea, it's like the famous "Skin in the game" principle, because if you don't have Telos and you are not willing to risk some amount - may be your proposal is not worth checking, or may be you should look for opportunities somewhere else.

So this is how my proposal looks like at Chainspector On the right is first page and the link below to full PDF. On the left is the voting process, right now 29 votes casted. 1,421,263 votes are in support and 1,188,995 against.

29 doesn't mean 29 people voted. Some people (including me) voted from 2 accounts, some people voted against with several accounts. Also 1 account can be shared by several people, here I mean accounts of Block producers, as usually they are teams which might be 5 or 10 people.

So since submitting this proposal, I'm often refreshing the page (which is updated every 30 minutes, the votes doesn't go instantly). If you are crypto-investor, it can be compared how you refresh Coinmarketcap page of Blockfolio or your account on exchange to check the value.

It's really amazing and exciting to check votes, who vote and how. Of course most the accounts I don't know, but some I already know by their communication in telegram of just the name is visible. For example account telosdouglas, who left a comment is obviously Douglas Horn from Goodblock and Telos Foundation.

After submitting proposal there are 28 days for voting, and right now 21 day is left till the fate of it will be decided. So it's been only a week since proposal is there, but during this time my mood and attitude changed dramatically. Firstly I was sure that if will get many votes, as this crypto-targeted promotion was something that many people said Telos needs. There were small votes coming slowly in support, but then one big whale voted against. He voted against many other projects, so "nothing personal", but still it brought project 99%"No".

Then Marlon from telosmiamibp voted in support with big amount (Previously he spoke in telegram with me and verified that I own those accounts mentioned) and his verification brought more votes. So then I became sure that the proposal will be voted "Yes", when such people and others show their support.
But then in some time I got more "No" votes which changed the ratio to "30/70" or even "20/70". So i thought, it's the end.. all who voted "Yes" already voted, and somebody might still vote, but there is no way I can get hundreds of thousands votes for "Yes"... So I was sure that proposal would be declined..

But then in some time I checked and I see that now - more votes are for "Yes" (like in the screenshot). What happened? Big whale changed his/her opinion and put "Yes". What caused this change, I don't know. May be the comment of Douglas? May be some discussions, or may be the first "No" vote was done with mistake.. I don't know and of course I was very happy. This gives the big chance, but of course the whole fate of proposal in unpredictable.

Some other proposals' fate is visible. For example it's clear that Scatter's WP will be supported and it's clear that some won't be supported. But my WP and some others might be approved or rejected. And that's what is interesting, which shows the real great example of blockchain governance.

It's not a democracy, where 1 person equals 1 vote. It's more like decentralized feudalism, where authority, merit and stake (capital) matters. If you are great known developer or somebody famous in industry - you will have big chances with your proposal even if you don't have Telos at all, otherwise if you have big stake - you can be the only supporter of your project and win. This also gives the bigger motivation for some people to hold coins than staking rewards or potential rise of the price. I saw some accounts moving fund out from REX (and therefore receiving less profit) only to vote against, and others moving funds only to vote for somebody else's project.

Some other blockchains have similar governance system (i.e. Decred has Politeia, which I will study more soon) and this is one of the most interesting aspects of blockchain for me. When the tokenization as the process will move forward, when token will become analogy of share, I see similar governance might become good cost- time- saving solution. Technically it's already possible to issue tokens on Telos and vote in a similar way. I'm sure that some day parliaments, NGOs, enterprises will adopt this or similar way of governance.