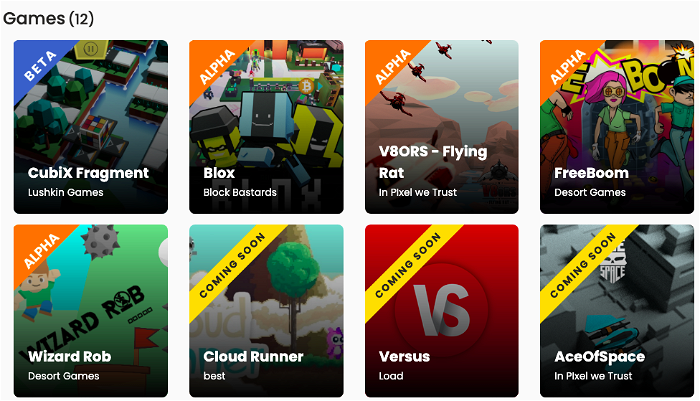 Almost a year ago I wrote an article about BLOX game, which has elements of education in the blockchain world. The game was developed by Block Bastards, who also developed player engagement reward platform Qudo, which has its own Telos-based token/coin and there are already 12 games on the platform.

QUDO is a proof-of-gameplay reward mechanism aiming to revolutionize the gaming industry. Gamers are rewarded for their time playing, while Game Developers grow their gaming community, earn crypto and get help from adhering services. So this is a win-win situation for the game developers, game players, and other involved parties.

You can already sign up on the platform, play games, and earn some Qudo coins, but please remember that the project is still in the alpha phase and now is running on Telos test.net. QUDO beta launch on the TELOS main net is planned for the first semester of 2021.

Qudo has its tokenomics model which is still experimental, and basically, there will be 9 billion QUDO Max Supply (1 billion of QUDO is pre-minded). Every 1 minute, there will be a new block containing all new information, including transactions and rewards. For the first 8 years, every block brings additional 1024 QUDO coins into circulation until it reaches the 1st halving, where the number of new QUDO tokens per block becomes 512. This halving will occur every 8 years for a period of 80 years. According to these rules, the maximum supply won't be reached before the year 2101.

Benefits for Gamers:
You get just for playing. When you play a game that is powered by QUDO, the time you play is reported by the game to the QUDO rewarding mechanism.

Achievements with benefits. As you progress in a game powered by QUDO, unlocking achievements can come with a bonus in QUDO coins, offered by the game you are playing.

Highscore Rewards. Each game has its own pointing system, but it can have a correlation with QUDO rewarding system and offer you QUDO coins every time you reach a new Highscore.

Benefits for Game Developers:
Rewarding mechanism. The vast of existing games don't have any rewarding mechanism at all. With QUDO gamers get rewarded for their activity, achievements, and performance.

Cross-game token. Coins are spendable across all participating games. Scalable and secure

Built on Telos. Telos as an ecosystem is experiencing good growth both by the number of people and dapps (including games).

Unity SDK. Easy integration into any Unity-based game. Fits seamlessly into the gaming experience and connects your game to the Blockchain. More engines will be supported soon.

Built-in B2B Marketplace. Game Developers are rewarded with tokens that can be used to increase their game visibility, get help on development, among other benefits, available on a Built-In marketplace of adhering Services.

QUDO is still accepting more game developers with the possibility to join as founding partners until they launch QUDO on the Telos mainnet. There is no need for previous blockchain knowledge or experience, you just need a game that could benefit from QUDO’s features.

To apply, visit qudo.io, or contact via e-mail at qudo.support@blockbastards.io