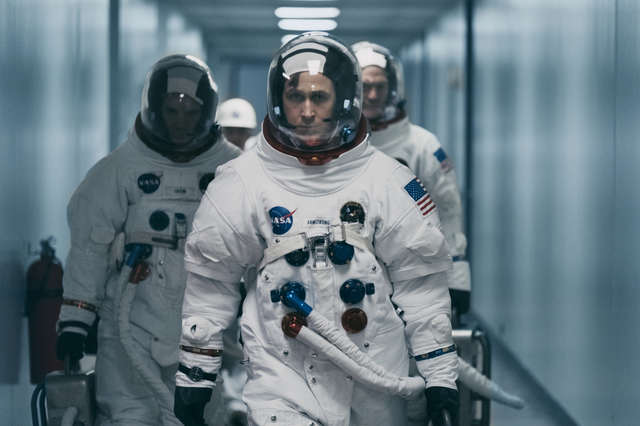 Cast: Ryan Gosling, Claire Foy, Corey Stoll, Kyle Chandler
Director: Damien Chazelle (La La Land)
Why it’s great: In his last two movies, the pummelling drumming character study Whiplash and the archly romantic musical La La Land, director Damien Chazelle explored the emotional sacrifices artists must make for their work. His latest, a flame-kissed Neil Armstrong biopic starring a tightly coiled Gosling as the mythical moonwalker, is similarly a film about emotional repression and simmering male anger, but this time the canvas is bigger. (Literally: The movie switches to IMAX mode when Armstrong and crew hit the surface of the big rock.) Chazelle's cold approach to examining individuals with an unhealthy work-life balance has often felt overwrought to me, but here, with Gosling stoically burying his feelings in pursuit of celestial glory, he's launched himself into a different artistic stratosphere. The flight sequences are visceral; the domestic scenes are no less tense. Rejecting the "science the shit out of it" triumphalism of The Martian, this is a movie that doesn't attempt to explain away the terror, confusion, or loneliness of space travel. Instead it places the viewer in the maelstrom.
Where to see it right now: In theaters (watch the trailer)