Cardstack: Unleashing All Advantages of the Decentralized Blockchain-Driven Internet

The longer I review different ICOs and blockchain startups, the less I understand what the hell they all are doing… Sorry for my evil irony, but I really think that every newly born blockchain project gets more complicated and too far out for ordinary users like you and me. Today, I am going to delve into yet another distributed ledger initiative called Cardstack and present their intricate vision in layperson terms.
Pretending to become “The experience layer of the decentralized internet”, Cardstack is obsessed with an idea to make different apps more decentralized and attractive for the mass market. Creators define their platform as “an open-source framework & consensus protocol, which will make blockchains more suitable and better-scalable for the common usage with its decentralized software infrastructure to dethrone omnipresent IT giants represented by Amazon, Google, Facebook, and other of their kind”.

Problems Addressed by the Project

Nowadays, every person has dozens of diversified social networks apps, messengers, and programs installed on their mobile devices. But nobody has ever managed to involve such a useful feature that would unite separate applications in one cross-functional platform for an overall convenience! There is where Cardstack comes to the scene. This startup put efforts to develop such an all-in-one application to enable users to watch videos, chat with friends, look through the news feed, and lots of other routine Internet activities – everything via a single user interface.
With such a diversity of applications and social networks, a user has to deal with an ocean of new accounts, logins, and passwords to remember and protect that is a daunting task. But being empowered to unite all your apps in one super powerful platform will drastically cut the time which you spend on switching between applications – you will no longer need to operate with a bulk of logins, passwords, and other details which different websites require from you to access their services.
OK, the idea is too murky so far but I’ll try to explain. Cardstack is basically an SDK (software development kit) for the creation of decentralized applications (dapps) or, broadly speaking, the blockchain-driven Internet. Third-party developers would be equipped with everything it takes to design and monetize any blockchain apps on the basis of Cardstack, while customers could blend features of these applications to get new apps, tailored to their specific needs/preferences. 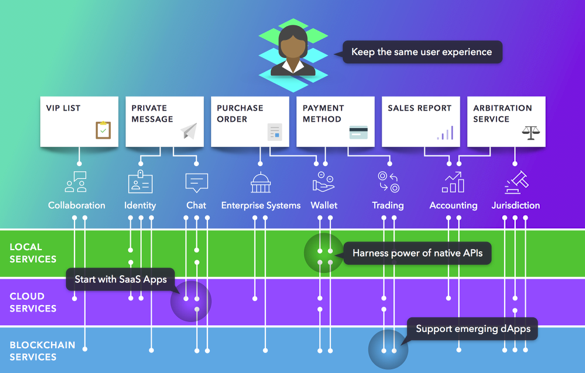 Cardstack aspires to grow into nothing less but the Internet for programs and software. It is supposed that their product would be highly compatible: users would be able not only to choose favorite applications but integrate interesting features of these apps to build new workflows and software mixes. It would be possible due to the next Cardstack’s main elements:
Tally Protocol is the system’s native scalable consensus protocol making it possible to execute complex calculations (for example, payment assessment, Big Data analysis, etc) and manage large groups of participants.
Cardstack Framework SDK is a universal set of instruments enabling the invention of versatile dapps and decentralized solutions. This framework is supported by Cardstack Hub, which ensures internal communication throughout a wide range of applications.
Ecosystem Token. CARD will be the lifeblood of all decentralized solutions built upon Cardstack enabling programmers to monetize their applications through smart contracts fueled by Cardstack cryptocurrency.

CARD is an ERC-20-standard utility token dramatically differing from mineable tokens whose mining revolves around solving intricate mathematical problems with the involvement of powerful computing equipment (yes, I mean Bitcoin). The CARD miners do not solve useless math puzzles but relevant tasks like a calculation of a fair reward for developers creating dapps on the basis of Cardstack. The final reward size will be determined not only on the basis of the general popularity of a dapp but the demand on its elements, as well. Since all the dapps built on the top of Cardstack would be open-source, developers could use some of their functions (templates) to refine their own programs. In such a case, a developer whose template was used by other developers would also be generously rewarded where miners are in charge of the incentive calculation.

Who Can Benefit From It?

Cardstack infrastructure is meant for:
Clients. Common people or corporations will be able to integrate decentralized & cloud applications on a single platform and pay for all available services via one coin (CARD), keep, manage, and send data throughout multiple applications;
Programmers/Dapp developers can utilize the SDK offered Cardstack to design software with an improved functionality and get well-paid for their contribution to the system;
Analytic Miners are allowed to earn Cardstack coins for their efforts to keep the platform alive (performing tasks, confirming transactions, resolving disputes, and so forth) and then redeem obtained tokens.

Though Cardstack’s ambition is to unlock all advantages of the decentralized Internet, rocking the boat of modern virtual superpowers with their well-established ecosystems and absolute adoption will be quite a challenge. Still, an idea driving Cardstack is very altruistic: to create a multifunctional platform, with which everyone can combine features of various apps to enjoy a brand new user experience. Will Cardstack hit? Like with any other ambitious project, only God knows, but hopefully, it will.