What is an Open Value Network? 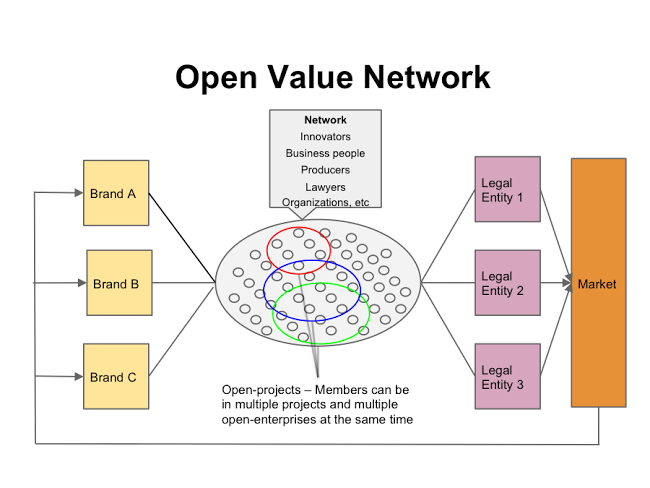 Where did this idea come from? Can this solve the issues we currently face today and move our society in the right direction?

You might be seeing this used more frequently and I wanted to share this concept for those of you that aren't familiar with OVN.

"An open-value network is a network of open-enterprises that can provide all functions of a corporation in an open-collaboration fashion.

Having open source hardware allows a peer-to-peer network of engineers to come together and constantly evolve a product through shared knowledge. OVN supports the idea of open source and compares the idea to the failure of the Makerbot.

Makerbot 2 had a bad printer head and was too complex of a design and just didn't work well. Supposedly the major issue was due to the fact that the company behind Makerbot did not reward the open source hardware community that contributed to the original unit's success.

The video below is Tiberius Brastaviveanu of Sensorica discussing OVN and a little on his reasons why Makerbot failed.

Sensorica produces sensors and releases their designs via open source hardware and is a well-respected firm.

You could compare the situation with Makerbot being similar to what Google and their Android Open Source project have had to deal with when working with Qualcomm being closed source with proprietary binaries of their chipsets.

The structure of OVN has some gaps. Open source community can do good in terms of ideas but can't really produce, distribute and support a physical product.

Like the case with Makerbot, if a company wants to take an open source idea and patent the technology, there isn't much anybody can do about it. These types of organizations are the ones that can bring the ideas to market. The problem with this is organizations that can bring a product to market have a different set of values and are driven by profit and not the actual product.

What Are The Benefits?

With OVN, people can come together to collaborate and enrich innovation. With the development of blockchain technology, it has made it easier to reward those of their contribution to a project through a public ledger.

Developers and enthusiasts can build more of a personal relationship to achieve a greater goal in a collaborative environment. OVN also has the ability to tackle social and environmental challenges that we currently face today. By having an open-legal and governance structures, this can create an open-enterprise framework that can target social and environmental market needs in an efficient way.

Where Else Can We See OVN Working?

@ADSactly. This project is modeled after and OVN which values community and cooperation.

ADSactly is a community of intelligent, independent, and open-minded individuals who work and share ideas, prospects, and contribute to one another’s projects to propel each other forward.

With incorporating crypto-currency as a product, this project has the ability to bridge the gap where the OVN model faced issues of bringing an idea to market.

You can take a look at the ADSactly whitepaper:
https://www.gitbook.com/book/adsactly/adsactly-white-paper-v1/details

With more and more adoption of blockchain technology, this seems like a perfect place for a OVN community to flourish. GOLOS in some ways has this model within its structure with the growth of communities collaborating and building strong personal relationships can only lead to more innovation.

To start trading with bitcoin, checkout:

Everything is well, but I'm more interested in practice - a real opportunity to realize my idea? Or is it just a transfer of technology?