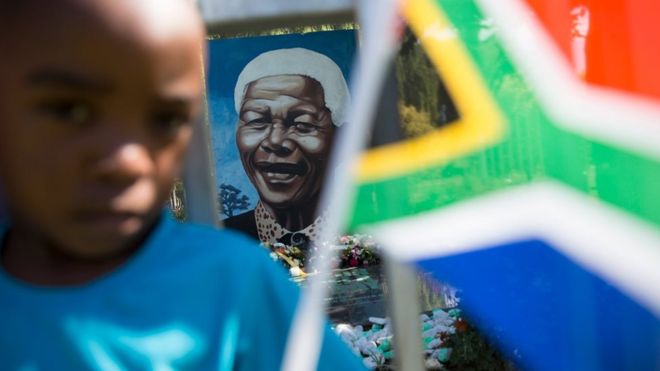 South Africa's corruption watchdog has found officials misused millions of dollars during Nelson Mandela's funeral four years ago.
According to the report, 300m rand ($22m; £16m) was redirected from a development fund to help with costs.
It had been earmarked for things like "sanitation, the replacement of mud schools and the refurbishment of hospitals," the report stated.
Instead, the authorities allegedly spent it on items like $24 T-shirts.
The man who destroyed apartheid
Nelson Mandela's state funeral: In pictures
Allegations of misuse first emerged in 2014, months after Mr Mandela's funeral in Qunu, Eastern Cape, in December 2013, which was attended by heads of state from around the world.
Now, nearly four years after Mr Mandela's death at the age of 95, the country's public protector, Busi Mkhwebane, has asked President Jacob Zuma to pursue the allegations further using the special investigations unit.
The 300-page report describes how officials in the Eastern Cape pocketed funds, ignored basic rules, and inflated costs.
Former South African President Nelson Mandela is pictured during a visit by former US president on July 17, 2012 at his home in Qunu, Eastern Cape,Image copyrightAFP
Image caption
Mr Mandela spent 27 years in prison after being charged with trying to overthrow the apartheid government
Ms Mkhwebane described the failure to follow regulations on the spending of public money as "very scary" and "appalling", according to South Africa's Mail&Guardian newspaper.
"It is very concerning that we can use a funeral to do such things," she told a press conference. "How do you charge or escalate prices or even send an invoice for something you have not delivered?"
Ms Mkhwebane said disorganisation had a role to play in the misuse, but also hit out at how South Africa's ruling ANC party had apparently issued instructions to officials on how the money should be spent.
"There are invoices we are showing with letterheads from the ANC. And monies were paid but again services were not rendered," she was quoted as saying by South Africa's EyeWitness News.
She added: "We are hopeful whoever has committed these acts will be taken to task."
This is not the first scandal to surround official events commemorating the apartheid struggle hero's life.
The man tasked with providing a sign language interpretation at the memorial service was accused of making up gestures, while a fight for control over Mandela's legacy within his own family mired the last months of his life.