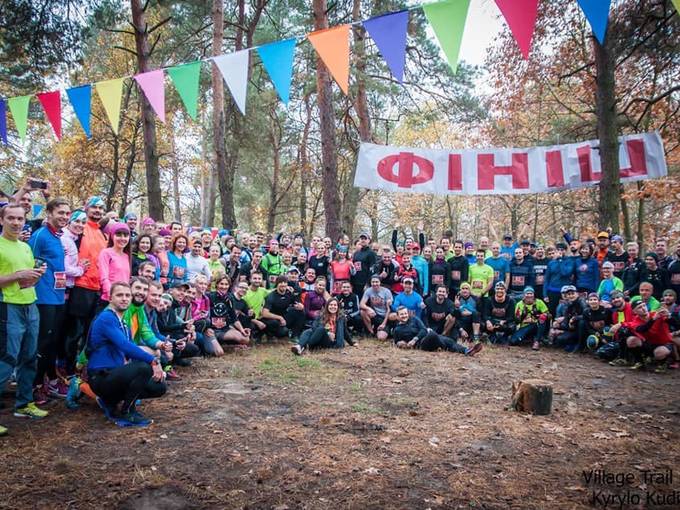 In the middle of autumn, I found it quite full of interesting trail running. Because he is scheduled to participate in the "Irdyn Trail Run" since last year, he has selected the "Village Trail" trainer as an internship company.

The announcement of the launch of the "Village Trail" came just weeks before its first launch. Although it was supposed to happen a week after "Irdyn Trail Run", I was interested in it. First, it was the first trail in Bila Tzerkva, and second, the trail received an interesting route and a distance of 27 kilometers. So he decided not to bypass his side.

Since "Village Trail" appeared spontaneously in the trail calendar of Ukraine, registration on it was done through a google form, after which the organizers received a letter with details for payment of the starting fee. The starting number was assigned after the confirmed and running motion of payment for participation.

I decided to get to the start place on the day of the trail since it was quite a bit to go from Kyiv to Bila Tserkva, and the start was planned for 11 hours. It was enough time to stroll the city a little way to the starting point.

I was in the Bila Tserkva for the first time. I liked the city: it is a clean, especially pleasant impression on me by a dedicated strip of public transport, which, to my great surprise, only went public transport, and other cars did not drive there. Are there any places in Ukraine where buses, trolleybuses, and shuttles can travel freely with their own lane, which, moreover, is not converted into a parking lot? Although it was not disappointing. I was going to the start place until I was lucky enough to run into one bridge on Prince Vladimir Avenue. He seemed to be not bad for motorists: the new pavement is neither a hole nor a hill. But when you are a pedestrian or a cyclist, you will be surprised. Once upon a time, there was also a pavement on the bridge. But now it is impossible to call it because it is completely broken, littered with pits, due to which you can simply fall down. Is it possible to walk at all? Well, I don't know, officials probably think it is possible if it is open to pedestrians. There are not even any warning signs! How can a repair be done? One part is repaired and the other is not. It is more convenient to repair the entire surface of the bridge. Although not when you do the repair of the object completely, the money is broken once, and so it is possible several times. That's why it's probably more convenient for them.

Since the starting place was spread out on a clearing in the woods, I had two ways to get there: through the city streets or through the fields. Of course, he chose the second option to see the river Ros and a little to admire the surrounding nature.

When he got to the starting point, he immediately picked up his starting number and started waiting for the beginning of the trail. As for its debut, the "Village Trail" has garnered a good number of people who want to run it - 150 members.

The "Village Trail" came in a single circle and was accessible at a distance of 27 km.

The surrounding nature promised it would be interesting again. The first part turned out to be interesting because it passed through forest roads and paths along the railway track, after which the trail route dived into the territories of the villages of Tomylivka and Klochki.

Since the "Village Trail" started just 6 days after the "Irdyn Trail Run", I realized that my feet had not quite recovered after the marshland, and sooner or later my knees had to tell me they wanted a break. I didn't know just what a kilometer the trail would be. Immediately after the start began to look for runners with a similar mine a pace that could be kept in check for a long time. I didn't have to look for them for a long time: about 2 miles, I managed to reach the company of two guys, which I kept to the middle of the track, or rather to the first climb, to Mount Solovyukha, where I decided to take some pictures of the surrounding landscapes.

The "Village Trail" trail had many small ascents and descents, but only 2 were interesting. The first was located approximately 8 miles of trail on Solovyukh Mountain and had a height of 203 meters, after which participants were waiting for KP with gusto. I did not stop there for a long time, drank a little water and continued to move towards the finish line. The first one I managed to overcome half of the "Village Trail" in 1 hour and 10 minutes.

The "Village Trail" trail had many small ascents and descents, but only 2 were interesting. The first was located approximately 8 miles of trail on Solovyukh Mountain and had a height of 203 meters, after which participants were waiting for KP with gusto. I did not stop there for a long time, drank a little water and continued to move towards the finish line. The first one I managed to overcome half of the "Village Trail" in 1 hour and 10 minutes.

My knees began to feel about 13 miles away. I managed to overcome the distance of 13 miles in 2 hours 10 minutes, so the last 4 miles I decided to no longer mock them because in the last 6 days they suffered enough during the "Irdyn Trail Run" and "Village Trail". Therefore, he slowly headed towards the finish line.

The "Village Trail" has left a good impression on the organization and the surrounding nature. The organizers paved an interesting route for the "Village Trail", which lies not only in the forest and fields but also in the surrounding villages and farms. There were even several asphalt sections of the villages. The marking of the route was striking, the work of volunteers struck. I was especially surprised that the participants were constantly accompanied by cyclists who indicated the direction of traffic at problematic turns.

As for the first start, the "Village Trail" had a pretty good organization.

Not only did it not run at the interval of 9 - 10 miles, where the route passed the asphalt section. There were such "primates" at the wheel of the "troughs", which saw the column of people moving along the roadside, so they swept near them at full speed. I understand that they were the ones who were always late somewhere. But they pleased those drivers who were slowing down and trying to change lanes.