Running through the Antalya Square - "Runatolia" 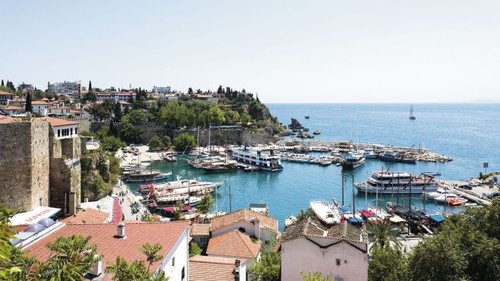 After his acquaintance with Cairo and running the "Pyramids Half Marathon", which took place on the Giza Plateau, it was time to return to Kyiv.

So, leaving one sunny country, namely Egypt and its capital, Cairo, I went in search of new cross-country adventures to the shores of Turkey, namely the city of Antalya, and took part in a local marathon called "Runatolia".

You can register for the "Runatolia" marathon on the official website of runatolia.com. There you need to enter your contact details, choose one of the distances you want to run (42, 21 and 10 kilometers) and the size of the T-shirt and then pay for the participation in the race. The price for a distance of 42 kilometers starts from 80 Turkish liras ($ 13). After payment for participation, an e-mail with confirmation of payment and ticket will be sent to your e-mail to pick up the starter pack.

The "Runatolia" marathon alongside the "Istanbul Marathon" is considered to be Turkey's top marathons. Therefore, usually, before the start of a cross-country event that will be attended by a large number of participants held a so-called "Sport Expo", where participants can pick up their starter packs, get acquainted with interesting cross-country events that take place in the region and visit an exhibition of sports goods. The "Sport Expo Runatolia" lasted for two days on February 28 and 29 and took place in the "Terra City" shopping center.

The "Runatolia" marathon package consisted of a starter number, a timing chip, a T-shirt, a "Pasta Party" ticket and a backpack. In order to receive it, it was necessary to show the ticket, which came to the e-mail after payment of the entry fee. There is a slight nuance in getting a starter pack when you get a starter number you need to remember to get the chip as they are issued separately. The Pasta Party was held on February 29, the day before the "Runatolia" marathon started.

After receiving the starter pack, I went in search of interesting starts presented at the "Sport Expo" in Turkey. The exhibition featured two half marathons, namely the “Avsa Yari Marathon” and the “Bodrum два Marathon”, two “Izmik Ultra” (160 km with ITR 6) and "Uludag Ultra Trail" (100 km) 5100 meters high (ITRA 4)) and the 14-kilometer "Geyik Kosulari" trail was also introduced. After visiting the "Sport Expo Runatolia", I went to get acquainted with the city of Antalya, namely its historic center and port.

The start of the "Runatolia" running event was scheduled for 9 am on Sunday morning and since the "Runatolia" event consists of 3 races (marathon, half marathon, and 10 km run), the start of the event was delayed by the organizers. Runners were the first to run the marathon at 9 o'clock, followed by a 21-kilometer race in 15 minutes, and the last 10-kilometer race began.

The starting point for the "Runatolia" marathon was located in the "Atatürk Kültür Parkı Park" opposite the "Antalya Stadyumu Stadium". Where a lawn was located on the lawn, and in the depths of the park there was a stage for awards, a luggage room, and a food area.

The "Runatolia" marathon route consisted of one lap, but this lap had some peculiarity, namely the participants of the marathon had to run 21 km where they were expected to turn and return the same route to the finish. The time limit for overcoming a marathon is 5 hours.

The route itself, or rather the 21-kilometer segment, is quite interestingly laid out, as it wanders around the city in its initial little way, and then goes along the waterfront, where the beautiful views of the Mediterranean and surrounding mountains are opened for participants of the race. In the end, it passes through the territory of two parks, after which there is a turn and the segment runs in the opposite direction.

As for the features of the "Runatolia" marathon, it has a fairly large number of sloping hills. Therefore, it can be logically divided into three segments, where you jump the first 16 kilometers up and down, the next 10 kilometers you run in a straight line and starting from 26 kilometers again the participants will be running up and down. There are quite a number of food items on the track, if I am not confused, they are placed every 3 kilometers where you can drink water or RedBulla and eat fruit or gel.

The organization of the "Runatolia" marathon is quite good to me, it has a rather interesting route with beautiful scenery.

The route is marked and completely closed from transport with a large number of food outlets. It was also surprising that they were given gels, this is the first race I have ever encountered. Unusually, there were no isotonic at the food outlets, instead of them being RedBull, which has a different purpose than isotonic than I did. Since there are many ascents and descents on the track, running up and down over time is a little malnourished and annoying.