Around the river Wisla – “Warsaw Half Marathon” 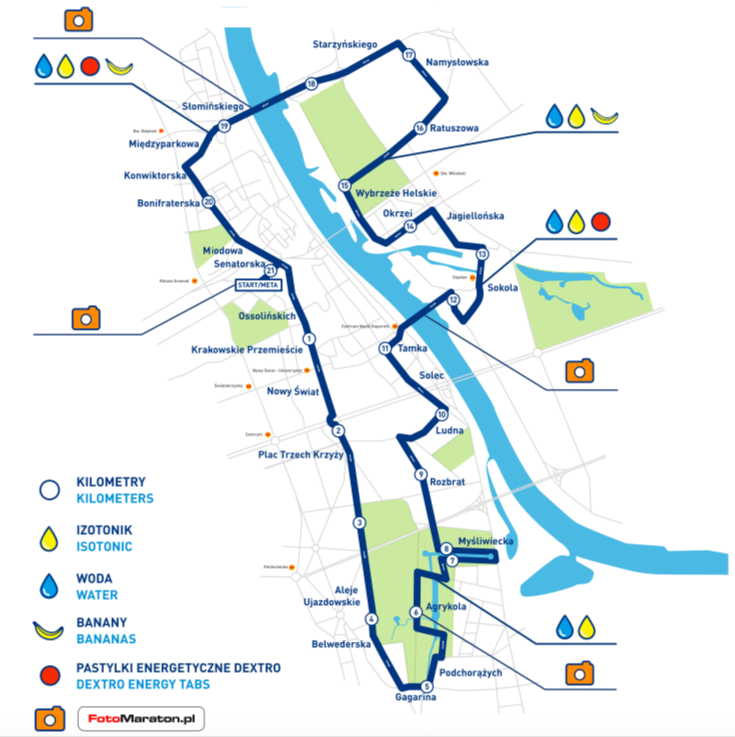 After a successful 21-kilometer run in Katowice in 2017, I was full of inspiration and decided to make such events a small tradition in my life. When I began to think how to open my running calendar in 2018, I chose a half marathon in Warsaw. It started pretty early, right after the winter, so it was great. I can’t say that I was preparing for it in a responsible manner. I just ran several times in Kyiv, every time about about 6 km, at least for reminding my legs how to run Warsaw Half Marathon is a historic event in terms of the number of people taking part in it (about 14,000 people, it is becoming more and more popular every year). Warsaw half marathons and marathons have been popular for many years among Ukrainians: it happens that some of them become winners.

It should be noted that Ukrainian athletes in this half marathon in 2014 took part in honor of other athletes who were killed or wounded in the Kiev Maidan. 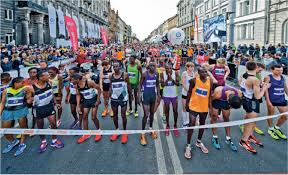 Since it’s possible get stuck near the border, I went by train, because I did not want to risk. When arrived in Warsaw, I delivered the main items to the luggage room at the station and kept only the most necessary things to run. That a trouble! I as always managed to forget the towel and slippers. As practice shows, they do not include in my list of necessary things.
Warsaw met with kindness: it was a warm, calm sunny day, the snow had almost melted down. Rooms and starter packs were issued at PGE Narodowym. I typed the address in the navigator and went. Everything was beautiful at that time - I enjoyed the beautiful views of Warsaw and the calm Wisla. 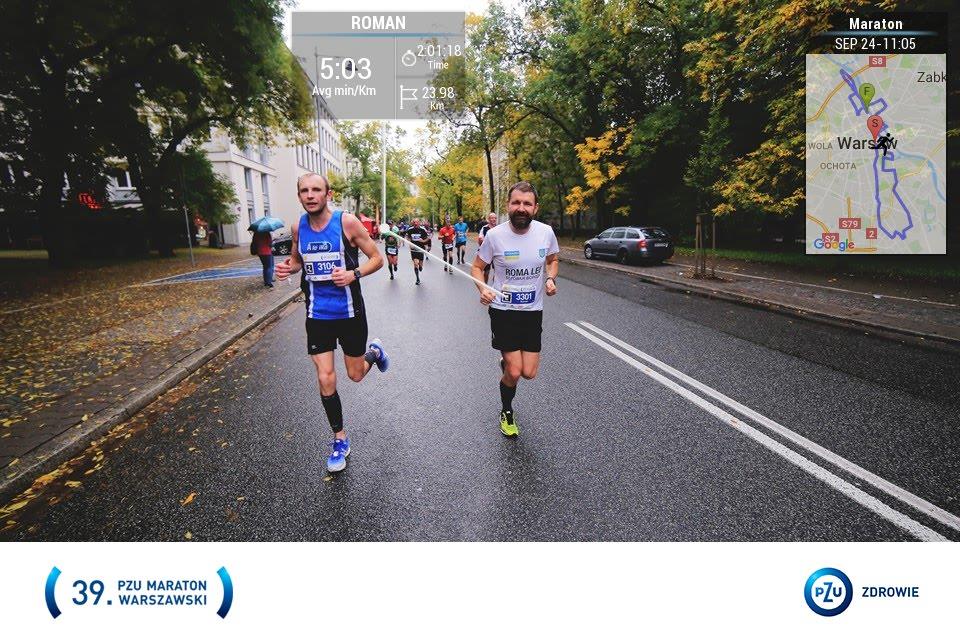 A surprise was waiting for me: to get the starting number, we had to go through a red carpet. Going deeper into the middle of the stadium, we saw information stands of different marathons from all over the world everywhere, there also was an exhibition of sports equipment for running. I was very that among all the stands there was one that told about marathons in Ukraine. It was nice to have a conversation with Ukrainians in a foreign country. 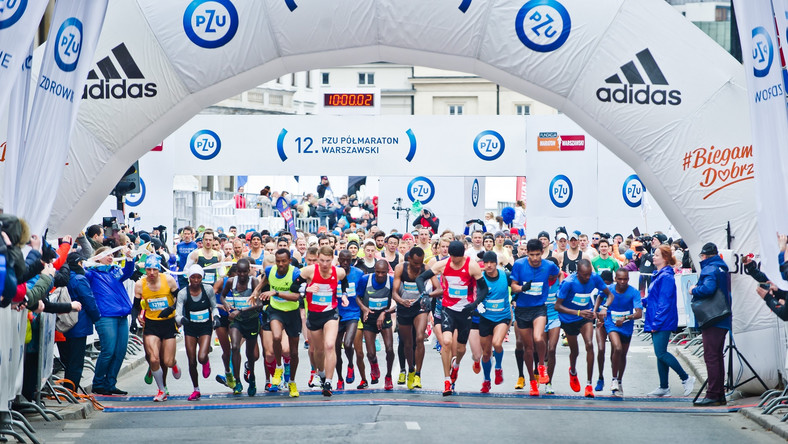 Walking further, I met with representatives of different cities: Białystok, Łódź, Berlin, New York, Krakow and a lot of others I couldn't help taking their brochures, it was very interesting to get to know everything. By passing the exhibitions of T-shirts and treadmills, I went to my starting number. When I got it, my way was to the Chillout Hostel. I wanted to take a walk, but a lot of things didn’t allow to do that. I chose the hostel in advance, thinking about everything. As Katowice showed, everything happens in life, so it was important for me to be close to the starting point of the marathon. The service and hostel status were at a high level. I did not expect that wonderful atmosphere for just 71 zloty, which I paid for 2 nights. 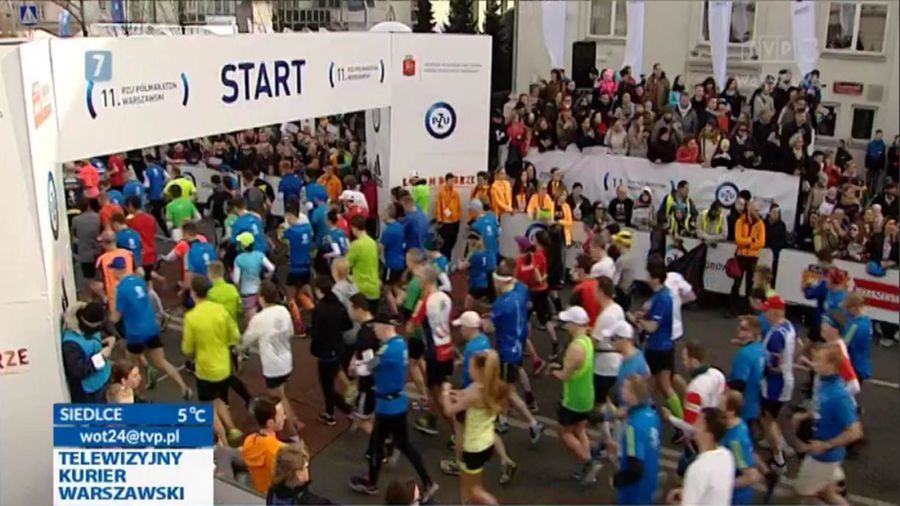 I settled, gathered all the stuff and went to look for a cozy place to have dinner, after which I would gladly go to the museum. Then I saw a Chinese fast food restaurant. You do not even imagine that delicious dumplings with cheese and rice with chicken meatballs! But that soup of water and leaves I didn’t understand at all. In general, the service was great. Then my way was to the Muzeum Narodowe w Warszawie. The collection really deserves attention, but my expectations were not justified, there were too many ancient hunting landscapes, portraits of various nobles and kings, as well as various church stuff, altars and statues added a sense of boredom.

The next day was special. Half marathon began at 10:00 in the street Konwiktorska. I woke up at 7 o’clock and got ready, it was a time to leave. It was not very far to go - only 3.5 km. After a little warm up I went to take a place at the start, admiring the LOT stewardesses, who told the rules of the PZU PÓŁMARATON WARSZAWSKI. There where a lot of participants, over 14,000. This caused a large crowd of people in the first 8 km, so it was quite difficult to escape. Somewhere I even had to outdrive them along the roadside. Though crowd in the next 10 km became smaller, still there were a lot of people. Quite often it led to great inconvenience. When I got to the second point with water, I drank the isotonic and went on my way.

After 16 kilometers I began to feel that I was not in fit and had to stop to rest. But even with a forced stop, I crashed into the time that I set for Katowice. I would like to run better, in 1:50 or 2:00, but I realized that the forces are not eternal and gradually leave me. When I get to the last item, I ate banana with an appetite to add a little bit of strength and drank another isotonic. When I came to the finish, it seemed to me that all the forces had run out completely.

But it was worth it. Especially I liked running in the tunnel. And the overall route of the marathon was well thought out, there were several climbs and descents, the route laid through the bridges of the Wisla. The insidious support of the inhabitants of Warsaw was adding strength, the simple ordinary people who met us on the way, musical groups, which were located throughout our difficult path.

As a graduate, i has traditionally received a medal, water, protein cocktail and non-alcoholic beer. After resting and taking a cup of fragrant, warm tea and a bowl of soup, i gradually began to gather my stuff.

That's it, friends, that is how the second half marathon ended in my life finished. I put a personal record and got another invaluable experience in running.

In general, I liked it a lot. Join!