Around the lake – “Ternopil Half Marathon” 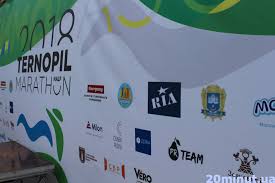 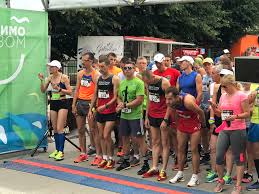 Lifes full of interesting events. But, unfortunately, not everything that is planned can be realized. Then we rate it as an impulse to look for something else that will replace the previous one. That's what happened to me: I thought that I would take part in one event, but the e best.

ith tant that for me, so I humbly started looking for a replacement for it. I was not not very upset because, as they say, everything leads to thehe best.

WiWith te arrival of June, I returned to Kyiv and, as it was already the tradition, I began to look for
Ukrainian races that had to take place in the near future. Immediately I noticed Ternopil Half Marathon, which happened (as you already understood) in the Ternopil. It drew my attention to the fact that the route was lying on the shore of the lake near the city center. After resting a few days after the Leiden Marathon, I went back to training in my favorite "Victory" park. When I decided to run, I did not expect anything special from the provincial marathon, to be honest, I thought it would be a regular highway. 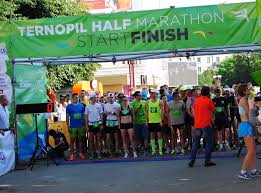 But life is unpredictable, because there are always some "but" waiting for us, which often surprises and gives a pleasant impression. And my case with a marathon in Ternopil was no exception.
I went my destination at 14:34 on Saturday from the central Kiev railway station. The road was easy, in addition, I was lucky enough to talk with several runners who were going to run after the triathlon. All the rest of the time I decided to sleep, because I did not look for hostel, it was not necessary, because at 7 a.m. I already had to go to take the number. For the same reason, I stayed at the railway station, reading the book. It was goornaya. 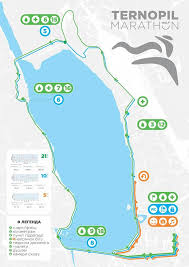 With thed not read a good book for a long time, especially in the style of Dan Brown "Ombr. Above the Darkness and Light" by Ukrainian writer Laura Podgornaya.
With the arrival of the morning, I went to the Theater Square of the city, where I had to get my number. Having got a badge and a wallet with brochures, bracelet and macaroni. Why do macaroni? Honestly, I myself still did not understand their purpose, such a surprise was waiting for me for the first time :). Then changing clothes and preparing for the start. 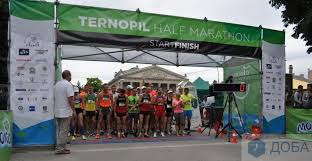 The last instructions and wishes were heard at nine o'clock, and the participants of the distance, which was 21 km, went to the starting platform. The shot sounded and the runners ran along the road. 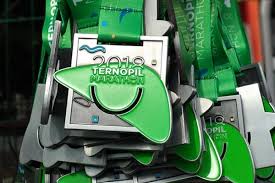 In general, the track included two circles around the Ternopil pond. At first, the path was going downhill, which is supposed to be a plus, but before the finish there was a descent. Then the path was through the bank: here that "but", which was mentioned at the beginning, began. The plain route, after turning to the right, contained a surprise - a ladder, which we had to run up. It was easy for the first time, which can not be said about the second circle. The next "but" was that the path led us to the forest, where the road had a lot of climbs and descents. It was necessary to pass a little bridge, and a slight descent behind it. After running out of the forest, the route continued to make its way along the bank. There were 6 degradation stations (3 km, 7 km, 9 km, 12 km, 16 km, 18 km). Finish and start united into one whole. 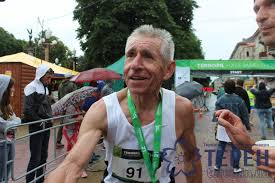 The work of the volunteers was wonderful. As for me, the route is great for preparing for a run in the mountains: during the run you can feel all the quality of the road. Although there were residential neighborhoods and private sectors on the road, there was no support. It really upsets me, because in other countries support was crazy, and we had only a few inhabitants. I hope that this will change for the better, and the locals will begin to support the runners.
Also I noticed another thing: there wasn’t a great amount of people, which helped to develop high
speed. This was especially noticeable on the first lap. On the next circle we began to “stretch”, making distances between runners bigger, that so I did not always notice someone in front and behind. It made me gain speed, because the run itself was not so interesting. I think, over time, the half marathon will become more popular and we will not have to run alone. :).
In general, the impression is positive, which can be said about the route and the organization. Yes, and the run was my happy half marathon. Ternopil Half Marathon turned out to be the first event where I overcame a distance in less than two hours - this made it special to me.
Source: androshcchukcom/blogg