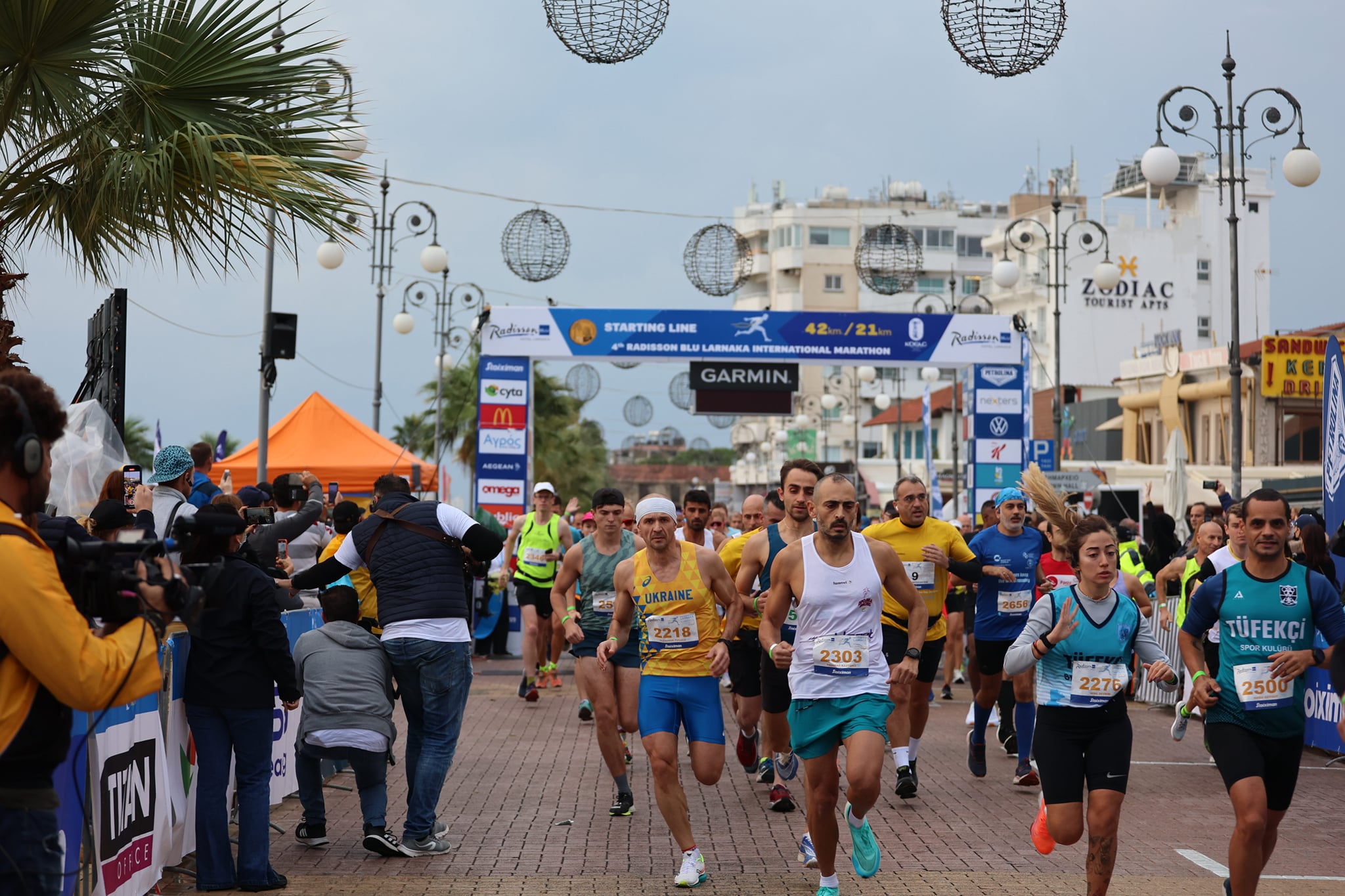 I had planned to start my acquaintance with the marathons of Cyprus and at the same time the island itself, last year. He decided to start his acquaintance with Cyprus by participating in the Larnaka Marathon, but due to the peculiarities of last year, this running adventure had to be postponed. I didn't have to wait long for the future and at the end of this year's running season, I had a little surprise, namely the opportunity to run through the streets of Larnaca during the local marathon for which I have registered since last year.

You can register for the "Larnaka Marathon" through the official website of the larnakamarathon.com marathon, where participants can choose one of three distances, namely the main distance - 42 kilometers, or distances of less - 21 or 10 kilometers.

The main distance "Larnaka Marathon" consists of two laps, small - 11 kilometers and large - 31 kilometers. The route of the marathon partly circles the streets, the embankment, and the outskirts of the city, so the participants of the marathon can enjoy both the local architecture and the surrounding nature while running. The road is paved with asphalt, but there are several small sections with cobblestones, in addition, there are small ups and downs on the route. Food outlets are located every 5 kilometers, where you can not regain their strength with water, isotonics, tubs, and bananas.

The road to another running adventure started on Friday morning at Kyiv Airport and from all my foreign starts of such a crowd of runners at the airport, and then on one flight, I can hardly remember. And probably, if this morning among the passengers of the flight Kyiv - Larnaca to conduct a survey, it most likely turned out that most of the passengers of the flight - fly to the marathon.

As for the peculiarities of departure and arrival, it can be said that at the reception you had to present a certificate of vaccination or PRL - test and fill out the form on the platform CyprusFlightPass, where you had to specify one of the options vaccine, PRL test or antibodies and a hotel where you will stay. Upon arrival, checked only the vaccine certificate or PRL - test, if neither one nor the other, then PRL - test could be passed before passing passport control. I was asked for a vaccine certificate or PRL test only in restaurants and when I received the starter package for the marathon.

The air gates of Larnaca were greeted by sunny weather, which was pleasing and probably one of the most convenient airports I had to visit in terms of infrastructure because approaching the bus stop, I had a list of almost 10 buses going to Larnaca and a suitable bus was not needed long wait (price 2.5 euros). In addition, the resort is located about 5 kilometers from Larnaca, and along the road, there is a sidewalk that allows you to walk or jog and admire the salt lake, which is located between the resort and the city.

Friday was mainly spent getting acquainted with the city and its architecture, and the main task of getting the starter pack was postponed to Saturday. Starting packages started four days before the marathon at the Passengers Hall of the Larnaka Port. In addition, on the day of the marathon, participants could also receive their starting package two hours before the start of the marathon. In order to receive your starter pack (number, T-shirt, backpack) you had to present documents (passport) and a vaccination certificate (PRL - test).

The most interesting started at 7 o'clock on Sunday morning, namely the start of the "Larnaka Marathon". Here everything took place according to the classic scenario, first the participants of the main distance - the marathon - start, and then the half marathon and the 10-kilometer race take turns. Of the features that I did not notice at other marathons this year in which I participated, it was necessary to stand on the appropriate stickers in the starting corridor (between the participants was 1.5 meters) and volunteers followed it, so the usual crowd that occurs before the start was not.

After the start of the countdown, the participants went to conquer the marathon in Larnaca. The start of the marathon turned out to be quite good for me, I managed to run the first lap (11 kilometers) in 59 minutes, I overcame it mainly in the company of Oleksandr Hrytsyn from Lviv. In addition, on the route of the marathon, you could often meet other Ukrainians, which made running more comfortable and easy. The only thing that caused a little discomfort in the small circle is the crosswind on the waterfront.

After overcoming a small circle, it was time to overcome the main circle of the marathon, 31 kilometers long, here mostly running alone, admiring the waterfront and the surrounding nature of Larnaca. Since the weather was cloudy, the distance was generally quite comfortable (16.3 km. - 01:24:42, 26.8 km. - 02:26:58, 32.7 km. - 03:05:06). The only trouble I had to get into, somewhere at 30 kilometers, was suddenly added to the wind by a downpour, which was quite refreshing, but on the other hand, completely discouraged the desire to run.

I didn't have to fight with thoughts for a long time or not, because about 7 kilometers before the finish I was overtaken by Artem Pedorchenko and together we supported each other by conversation and continued running and counting the remaining kilometers to the arch with the inscription "Finish". I managed to cross the finish line in 4 hours and 18 minutes and it turned out to be my best result in the marathon. Which in turn made me a little happy, because going to Larnaca I relied more on the usual result (about 5 hours), because it was the third marathon in the fall not counting other starts, the last marathon of the season, and expect some interesting result for sure could not.

"Larnaka Marathon" honestly pleased me with its organization, it is quite good here. Although I missed the usual marathon events, such as "SportExpo" and "PastaParty". The route of the marathon was completely blocked and interesting because it passed the main architectural monuments of the city, the promenade, and along the salt lake. As for the support of the marathon participants by residents and guests of the city, it is also quite good here, but the support from Ukrainian fans was the most uplifting. Because when you run and see the flag of your native country and the shouts of "ours", the mood immediately rises and the kilometers left to the finish line are forgotten.