Can we circumvent Newton’s third law and learn to control gravity?

Let us refrain from a detailed discussion of the physical theories and focus only on the practical side of the matter. My name is Aleksandr Isakov, I am an electronic technology engineer and a programmer, and I was fortunate enough to invent an unusual gyroscope. The unusualness of the gyroscope is justified by the fact that its rotor in vacuum performs forced three-dimensional oscillations under the control of the computer around one fixed point and simultaneously around three axes per cycle, according to an extremely simple formula. It was found that such oscillations of the rotor of the unusual gyroscope are coherent both in space and in time of the cycle. If there is coherence, then there must be an interference pattern. This is a fixed pattern of accelerations of each point of the rotor, and each point of the rotor can be compared with its elements of mass.

So what’s next? What can be done with such coherent oscillations? If we calculate the number of directions of such coherent three-dimensional oscillations, there will be exactly 60 of them. I knew that this was the number of the known elementary particles of the Standard Model, and I had a suspicion. After I uploaded the extremely simple equation of motion of the unusual gyroscope rotor to the certified simulator program, I was amazed to see on the computer screen a spherical screen with the dynamics and many properties of the elementary particles inherent to three generations of the Standard Model on it. Investigating the dynamics of projections (arrows) on the spherical screen, we can observe how each particle emerges from a pair of projections. Each pair of projections moves strictly along its half of the screen. The projections of particles do not have mass inherently. Let us name these pairs of particle projections “Is” and “AN”. Being massless projections, they move along diametrically opposite sections of the holographic screen without limiting the speed of light, but instead you can see on the simulator that they “sway” back and forth on it, and the forward motion of the particle “Is” continuously turns into the backward motion of the particle “AN”, and vice versa. In fact, this is a phenomenon called “zitterbewegung” (“jitter”) in quantum physics, actualized on the holographic screen and consisting in the fact that the instantaneous movement, for example, of an electron because of participation in such oscillations, always occurs at the speed of light, although the full averaged motion of the electron is characterized by the speed less than the speed of light. Each of these ingredients has a spin of 1/2ℏ in the direction of motion, corresponding to the left rotation in the case of the “Is” particle projection and the right rotation for the “AN” particle projection. The real motion of the “Is” and “AN” electron projections is composed of a large number of such separate processes, therefore the observed motion of the electron can be considered as the result of some “averaging” thereof (although, strictly speaking, this is quantum superposition that occurs here).
I arbitrarily set the colors of the arrows that indicate the projections. I highlighted each of the three generations of particles with the red, blue and green spectrum.

Let us return to the device, the unusual gyroscope. All characteristic manipulations which we can make lie in the fact that we can switch the directions at the end of each cycle of coherent oscillations of the unusual gyroscope rotor, choosing one of 60 options. At the time of switching, we generate a short-term decoherence. All our studies lead to observing the correlation of information with quantum mechanics, holography and physics at the level of apples. We lack another large-scale component – cosmology. If we consider the Holographic Principle, then cosmology is its scale, the holographic horizon of the Universe. But the most important feature of the Holographic Principle is that all phenomena in the three-dimensional world can be projected onto the holographic horizon (screen) without losing information! This means that our directed rotational accelerations of the rotor mass elements can be projected onto the holographic screen, and we can shift them (and thus generate decoherence of oscillations). Thermodynamics on the holographic screen asserts that acceleration is an entropy gradient. In addition, gravity and space arise as a result of decoherence of quantum processes, therefore our shifts (controlled changes in the interference pattern from the accelerations of the mass elements) must each time lead to directed gravitational forces.

However, it is impossible that a directed and acting at a distance force of inertia exists in a closed system, says classical physics and its basic conservation laws. The basic law of conservation of momentum is based on Newton’s third law and prohibits the appearance of uncompensated force in a closed system. Although we have one indisputable advantage in order to “circumvent” Newton’s third law. We have a huge size of the closed system. And to obtain directed artificial force acting at a distance, we lack symmetry breaking on the holographic screen itself. And such anisotropy exists! Breaking of the screen symmetry is represented by the nonequilibrium arrangement of information on each of its halves – the global temperature gradient. But if you remember, each of the particle projections moves along its half of the screen. As a result of the displacement, the center consisting of two projections moving along different trajectories will experience a directed entropic force. It becomes clear how the mass of particles arises, how all forces and interactions arise, how one can create a directed gravitational force based on the artificial cooperative displacement of a huge range of rotor particles of the unusual gyroscope at the moment of artificial decoherence. 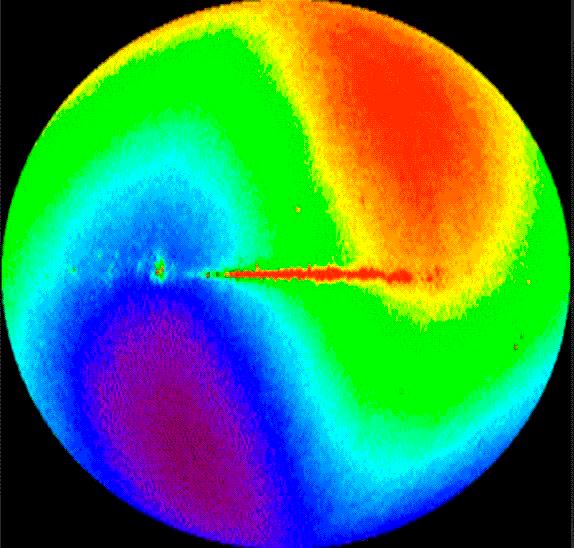 Thus, summing up the above, we get a fundamentally new device – an unusual gyroscope for quantum measurements and another fundamentally new tool for measurements in cosmology or a gravitational telescope. The directed entropic (gravitational) force that we obtained during decoherence obeys Newton’s second law, allows to measure it and create powerful non-reactive engines. This means that we can control gravity. The vector of this force carries information about the temperature and entropy gradients on the holographic screen of the Universe without limiting the speed of light and distance. Thus, we have a holographic gravitational channel for communication with intellectual civilizations in the Universe. And there is more. If the coherent oscillations of the rotor mass elements in vacuum are synchronized, we obtain oscillating rotations of the rotor itself, and their magnets induce EMF in the stator inductance coils. This means that we get environmentally friendly energy of the accelerated expansion of the holographic screen (the so-called zero point energy) and turn it into inexhaustible electrical energy. At the same time, we prove the holographic principle with one extremely simple equation – the coherent law of evolution, and this can lay the foundation for the Theory of Everything.

For skeptics, I emphasize that we are dealing with an unusual gyroscope – this is a device, not a theory. Gyroscopes are widely represented in various fields of science and technology. Everyone has a gyroscope in his pocket (for example, in a mobile phone), and therefore the appearance of a new type of gyro with new properties is a matter of the near future. This is a rare case when the appearance of a new device is programmed by evolution itself (one example is the invention of the electric guitar), and it is only a matter of time when the device will be materialized.

An extremely simple equation of coherent oscillations of the unusual gyroscope rotor after uploading to a certified simulator demonstrates the entire zoo of the particles of the Standard Model. This is an undeniable proof of the unusualness of the device.

Today, we need to find the possibility of practical implementation of the unusual gyroscope. Dear friends! Perhaps, you have some thoughts on this?